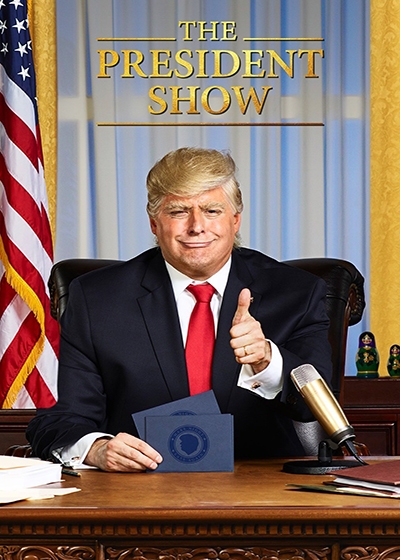 The President Show is a half hour weekly comedy series starring comedian Anthony Atamanuik as he impersonates President Donald Trump.

You can get free tickets by filling out a short online form which includes your desired show date and a second option just incase seats are all booked.

The President Show tapes every Thursday night at 5:30 PM. You must be there at least an hour before the taping for check-in.

For stand-by tickets be at the TV studio two hours before, incase anyone with advanced tickets does not show up.

After the first season of The President Show ended, the show was not picked up for a second season. However, the show did receive two hour-long specials that aired on April 3rd, 2018 and October 22nd, 2018.

The President Show is broadcast every Thursday night at 11:30PM on the Comedy Central channel.

Anthony Atamanuik has achieved worldwide renowned for his original impression of Donald Trump, refined through such shows as “Trump Dump” at the Uprights Citizens Brigade, “Trump vs. Bernie” comedy tour, and the Fusion sketch special “Trump vs. Bernie: Shout the Vote”! He has also appeared on television shows including NBC’s “30 Rock,” Hulu’s “Difficult People,” and Comedy Central’s “Broad City.” He is a longtime performer and teacher of improvisation at New York City’s Uprights Citizens Brigade.

This new addition to late night television is in the vein of Stephen Colbert’s The Colbert Report, in that both shows feature a comedian playing a character for the entirety of the show. Whereas Colbert played a fictional character, a satirical conservative version of himself by the same name, The President Show takes that concept to a new level, with Anthony Atamanuik portraying a non-fictional character – who happens to be the President himself.

Anthony Atamanuik is a rare breed of comedian. His brain works at a mile a minute, and he is always ten steps ahead. He is an improviser by training, and his breadth of knowledge is vast. This allows him to pull from a huge range of comedic tricks in portraying Donald Trump. His impersonation has been reviewed as far exceeding Alec Baldwin’s portrayal on Saturday Night Live. Whereas Baldwin often uses cheap tricks, such as flat jokes and face gags, Atamanuik’s impression is much more intellectual and on-the-nose. Impressively, this does not take away from the wide appeal of his comedy.

Unlike other late night staples, such as Letterman, Colbert, or Comedy Central’s own Trevor Noah, Atamanuik did not reach fame in his younger years. In his early forties, he is only just now reaching the limelight. Instead of relaxing into a lazy routine, Atamanuik has been hustling for decades and his comedic chops have continued to sharpen and refine. While he has long been a legend within the world of the Upright Citizens Brigade, he is finally becoming a household name for the general public. And boy, has the wait been worth it!

Atamanuik first became famous for his impersonation of Trump at UCB in New York City, where he originated his show “Trump Dump” in the early days of the campaign. While he originally expected that the Trump presidency was far from the realm of possibility, his satirical approach has remained constant, even as the world around him became closer and closer to the imagined world he was portraying. For an entire year during the campaign, Atamanuik became increasingly well-known for his spot-on impersonation due to the success of a touring comedy show in which he co-starred, “Trump vs. Bernie.” Atamanuik teamed up with comedian James Adomian, who had meanwhile been cultivating his own hilarious Bernie Sanders impersonation, for an alternate reality debate comedy show in which Trump and Bernie went head to head. “Trump vs. Bernie” played over 40 cities and toured internationally, and even when Alec Baldwin was tapped to play Trump on Saturday Night Live, Atamanuik continued to receive praise that his impersonation was far superior. Now, that comparison is put to the test in this weekly sketch show, featuring Atamanuik’s Trump in the spotlight.