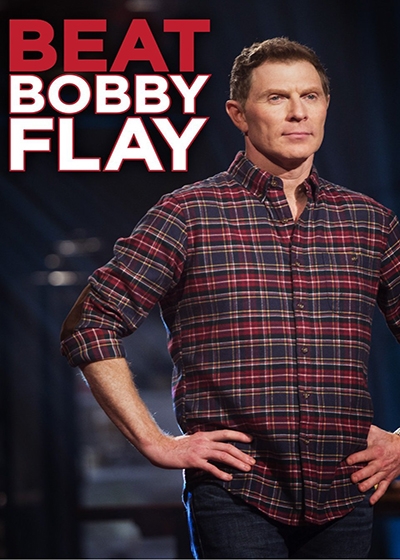 Beat Bobby Flay is a culinary cross between a friendly cooking competition and a reality television show. Aired on the Food Network and hosted by Bobby Flay

Bobby Flay Tickets are free. You can put in a ticket request by filling out an online form when the show is not on hiatus.

This TV show tapes Tuesday through Fridays in the morning. The call times for audience can include 6:45AM, 9:00AM and 11:45AM. Call time is half an hour and the taping lasts 6 hours.

To be able to get paid the full $60 you must stay for the entire taping if the show. You must keep in mind that audience members are usually standing for the filming of this TV show and so it can be tiring.

To attend a taping, you must be at least 18 years of age.

Bobby Flay began cooking professionally at the age of 17. The young Flay made such an impression with his first boss, that he paid for him to attend the French Culinary Institute. Flay's aptitude for cooking at his first job garnered him both a mentor, sponsor and a lifelong friendship with that man, Joe Allen.

Less than 10 years later, Flay opened up his first restaurant, of which many more were to come. Flay debuted on The Food Network in 1994 and has been a permanent fixture there ever since, cementing his place as one of the most popular celebrity chefs in the world. Flay has starred (or appeared in) over seven different Food Network Programs, including his latest show, Beat Bobby Flay.

As one of the premiere faces on The Food Network, Flay has hosted an array of TV shows on the network, some of which include:

Flay has also made several guest appearances on Food Network shows over the years, some of which include:

Attending a taping of Beat Bobby Flay is appealing to both fans of the celebrity chef and foodies alike.

The show involves competition between two highly regarded chefs, one of whom will take on Flay himself in the second round. In the first round, the two professional chefs must create a dish that has been specified by Bobby himself, so he can make it as tricky or easy as he wants.

After the chefs complete their first round dishes, the judges (and other famous celebrity chefs) critique and discuss the two competitor's final product. The judges then select the chef that they feel will provide the best competition to beat Bobby Flay.

The final round cook-off involves Flay and the 1st round winning chef. The handicap for Flay in this match-up is that the 1st round chef gets to decide what dish they are going to prepare. On top of that, the dish is only revealed to Flay moments before the challenge begins, leaving him with only moments to mentally prepare how he will create the dish.

The judges also do their best to distract Flay during his preparation, to give the non-famous chef more of an edge, which also makes the show a great deal funnier, with their amusing misdirects and antics all done to help the challenger beat somewhat arrogant Flay. The judging in the second round is supposed to be blind, but the judges are there for every step of the culinary creation, so it seems confusing to the audience that they would not know who created what.

Despite the handicaps, Flay's talent and experience as a top chef tends to find him victorious more often than not. However, it is not a rare occurrence for the challenger to upset Flay with a stunning turnaround in the last moments.

The set of Beat Bobby Flay was created very much with the intention of highlighting the culinary action. The audience members are positioned around the perimeter of the main stage, elevated to see all the action from a bird’s eye point of view.

This arrangement, while providing a different and unique perspective has the drawback of not offering any seating for the audience, so they get uncomfortable standing for a long time.

This is also where the drama and suspense unfolds as the judges critique the dishes and then decide on who created the better dish. The dim lighting surrounding the audience members provides a theatrical atmosphere as they appear as silhouettes in the backdrop of the main stage.

The omniscient fog-work and dramatic lighting used on the main stage makes for a pleasant visual and ups-the-ante in creating a dramatic atmosphere, in sharp contrast to the outside of the studio, which is a commercial wasteland of homeless people and illegal drug sales.

Audience members attending the show will enjoy the first-hand experience in witnessing celebrity chef Bobby Flay, and see him sweat a bit as he tries to defeat some very talented culinary competition. Those who are not fans of Flay, or The Food Network, are sure to find some entertainment in witnessing the drama of competition and also may find interest in witnessing the creation of some of the most tantalizing food around.

For individuals who do not mind standing for an extended period of time, Beat Bobby Flay can provide an otherwise enjoyable experience for "foodies" and general entertainment seekers alike.

The show features Bobby Flay, a celebrity host and three celebrity guest chefs as the judges. The show airs on the Food Network on Thursday nights at 10 pm, but sees more views online than on TV. These episodes are broadcast after the show is aired on TV. These rerun shows are also favorites for foodies, how love to DVR the shows and watch them multiple times for their own cooking education.

Food Network execs love this kind of TV show format as it is timeless and they could put the show into rotation for years, much like they did with Emeril's show, which can still be seen late night on the Food Network, right between some more contemporary cooking shows.

Beat Bobby Flay continues to be a highly rated (both critically and in viewership numbers) program for the Food Network, carried forward by the enormous following of Flay. He is one of the most recognizable TV chef personalities for the Food Network, finally beating Emeril Lagasse, the great grand-daddy of these types of Food Network shows.

The 2021 Contract Negotiations Damage the Bobby Flay Brand and Image

After a punishing 3 month negotiation battle with the Food Network, Bobby Flay finally signed a three-year contract extension in November 2021. The three year deal was inked for a whopping $100 Million with Flay’s Rock Shrimp Productions and effectively beat Guy Fieri and his negotiated $80 Million contract.

This now makes Bobby Flay the top dog at the culinary channel, but at what cost? The deal comes weeks after network parent company Discovery “cut off talks” and effectively fired Flay after 27 years amid his 'insane' and 'arrogant" payment payday demands of $200 Million for three years.

During the bruising negotiations, Flay also required Food Network executives to refer to him as "Top Dog" as a way to stick it to them and leverage his position.

The negotiations were handled so poorly on both sides that many insiders stated that the debacle was more akin to a really bad divorce than a business arrangement.

The backstabbing does not bode well for Flay's future at the Food Network,. which is now owned by the Discovery Channel. Discovery purchased The Food Network from Scripps in 2018 for $12 Billion in cash and stock and has total control over all Flay's projects for the next three years.

New Projects For Bobby Flay at Food Network. Beat Bobby Flay Show May End as it is Far Too Costly to Produce.

Bobby Flay will now go on with new projects at the channel, but the bad blood still remains with the channel's executives.

Although Flay appeared to have the upper hand in negotiations, the Food Network execs will not hesitate to backstab Flay after his crazy high money demand meant that the execs to the lower production staff all had to take a pay cut to find the money to pay the arrogant Flay.

Flay countered with “Stay tuned for some incredibly exciting new shows as I promise to take food and cooking to places we’ve never imagined before”. This indicates that the Beat Bobby Flay show may be doomed as Flay works on new and more interesting projects and culinary shows for the channel. Shows that cost less to make will be favored as Flay costs are extreme.

Having Flay host the Beat Bobby Flay is no longer a good use of his time at his new rate of $16,000/hour. Production staff on the show are paid just $25/hour and the interns are unpaid. Many now deem Flay arrogant and vindictive.