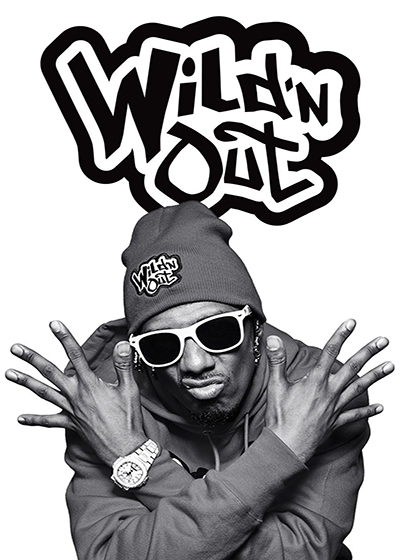 Free TV Tickets For Wild'N Out

Wild 'N Out is an improvisational TV show where comedians and rappers have rap battles with each other to see who is the best at insulting each other.

'Wild 'N Out' has previously been being taped in New York City and Los Angeles. The most recent taping locations have been at the Tyler Perry Studios in Atlanta, Georgia. The show tapings now rotate between these three locations.

Wild 'N Out episodes are taped weekly on Tuesday and Wednesday nights.

Wild 'N Out is transmitted at 11:00 PM every Thursday on MTV2.
The show is very popular on the network, so it broadcasts reruns at random times during late afternoons and evenings.

Although the show states that there is an over eighteen requirement, No ID's are actually checked on entry. This also means that audience members can use other people's reservations to get in, IE where the name on their ticket reservation does not match the name on their ID.

Nick Cannon was born in 1980 and is a multi talented entertainment impresario with previous roles in movies including Drumline and Roll Bounce. Cannon is also well known as a wannabe rapper and all-around stage and TV entertainer. Cannon found his way onto mainstream American television when he landed the gig as the host on America's Got Talent (AGT) when Regis Philbin and Jerry Springer could not figure how to hang on to this role. AGT also included Howard Stern and Howie Mandel on the show. Cannon also owns the full rights to his show Wild 'N Out, an urban sketch comedy show that appears at the top of the line-up on MTV. Cannon is infamous in gossip tabloids for his rocky relationship with Mariah Carey and subsequent separation and divorce from her in early 2015.

Wild 'N Out TV Show With Nick Cannon As Host:

For people who believed the hype that MTV2 was where music videos go-to-die, you may be surprised to find Nick Cannon's latest incarnation of the Wild 'N Out TV show flourishing on this channel. Wild 'N Out is not just showing up on this channel because it has nowhere else to live, it is actually flourishing on this somewhat marginalized cable channel. Over the last couple of years Wild 'N Out has actually become the highest rated TV show on MTV2 since the channel began transmitting in 1996 as The Box. Wild 'N Out now achieves over a million viewers on this cable channel that just does not normally garner that amount of viewership. The show is also strong with fussy demographics like the millennials, who cannot seem to operate a remote control unless it is part of an app on their iPhone.

Seeing Nick Cannon and The Wild N' Out TV Show being taped should be an entertaining and enjoyable night out, but the show is actually shot during the day! At the taping, it does not take them long to get you into the nightclub mood, it is just a little odd when you leave the studio and the sun is shining outside. Most of the audience at the taping are black, college-age (and under/unemployed) youth and because the show is shot during the day in the work week, the timing works for this audience. Other TV shows shot during this time-slot fill their audience with retired people, but this show is definitely not for them. There are no free giveaways at the show. They do have champagne bottles on the tables, but you quickly learn all those are fake and the show does not provide refreshments. The show has some great celebrities in the line-up, but you are never quite sure who is going to turn up. Getting seats at the tables, rather than standing in the balcony seems to be down to a bit of luck and being there very early. Production assistants seem to seat whites and Asians more in the camera line, as they are in the minority. Nick Cannon is friendly/down to earth and provides some hilarious moments during the show taping. Be prepared for a lot of waiting around as the production can take four hours to record just twenty minutes of show footage.

The Wild 'N Out logo was created by Kevin Van Laken in September 2005. Laken's approach was to portray an urban feel using a graffiti-styled font and the spray paint accents that surround the words 'Wild 'N Out' further emphasizes that hip-hop feeling. At first glance, one would think that the silhouettes are just vector illustrations, but upon extensive analysis, we could see that the middle figure, holding up his arms, is actually Nick Cannon and the figures next to him are two of his cast members.The cast member on the left looks decidedly like SchoolBoy Q, with his unmistakable bucket hat and the figure on the right looks very much like Jay Z. The looming figure in the center was added by Laken who did this purposely to further express Nick Cannon's power over the entire series, (Cannon being the developer, creator, owner, team captain and host of the show).

It has not been all love-and-roses for Cannon's TV show, which has been an on-again, off-again affair with its initial green-light in 2005 in Los Angeles, show cancellation in 2007 and then and its surprising new green-light in 2013 in New York City. The often mercurial MTV (owned by Viacom) decided they could leverage Cannon's new on-screen and off-screen stardom (From AGT as host and marriage/divorce with Mariah Carey) for more ratings. The plan worked, as each Wild 'N Out show now garners a 1.6 share in a market with over 1 million eyeballs watching the show on MTV2 and over 2.5 million people watching the show online in some other media form. MTV has made overtures to move the show from MTV2 to MTV, where their bigger shows reside, but Cannon smartly resisted the temptation to mess with a winning formula. However, in 2015, Cannon brought Wild'n Out back to MTV for the reason being this show is the best show MTV has to offer with higher ratings than any other show currently on either networks.

Noteworthy Dates For This TV Show:

The Wild 'N Out TV show can start at different times, but as an example the show on a given night ran to the following schedule:

In the early days of the show, Wildn'Out was taped at the Brooklyn Studios at 24B Greenpoint Ave in Greenpoiint, Brooklyn.

New York Show Tickets Inc. would like to mention that we are thankfully not affiliated, nor associated, with Nick Cannon's Wild N' Out TV show, MTV or Viacom. We are also not associated with the production companies: Collective Studios, MTV Productions, MTV/Remote Productions, One Louder Productions or 1iota audience who collectively produce the Wild 'N Out TV Show. We believe that Nick Cannon's recent "Cease and Desist" against New York Show Tickets Inc., under the false guise of trademark law, is a thinly veiled attempt to silence criticism of his show in the story that highlights the poor way they treat their in-studio TV audience.