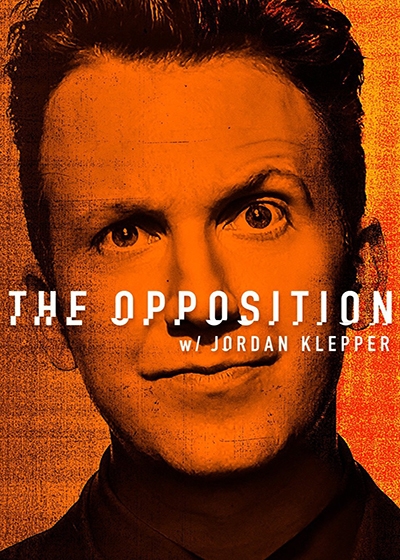 The Opposition with Jordan Klepper

Free TV Tickets For The Opposition with Jordan Klepper

The Opposition with Jordan Klepper Summary

The Opposition with Jordan Klepper is a late night news satire program that aims to satirize alternative media in the United States.

There are two ways to get FREE tickets to see The Opposition with Jordan Klepper. You can go to the official ticketing source or get paid to see the show at a third-party ticketing website. If you would rather go with the latter, you can get paid $30 to attend an entire two and a half hour taping.

The Opposition with Jordan Klepper tapes Monday through Thursdays at 6:30PM. We suggest to arrive an hour before taping begins, as ticket check-in can become very busy.

The Opposition with Jordan Klepper is broadcast weeknights at 11:30 PM Eastern Time on Comedy Central. On Optimum Online in the NYC area, this is Channel 50.

To attend this taping you must be at least 18 years old. Must also be admitted with a valid government-issued ID.

Jordan Klepper is a comedian, writer, producer, actor, and television host, who is best known for his former position as a correspondent on The Daily Show, under the tenure of both Jon Stewart and Trevor Noah. Trained as a member of the comedy troupes The Second City and Upright Citizens Brigade, Klepper got his start co-writing, co-directing, and co-starring in a series of comedic short films with his wife, Laura Grey.

The Opposition with Jordan Klepper Background

The Opposition has been reviewed as a bullish and pointed satirical news show, which lampoons the conservative alternative media by means of impersonation. Each half-hour episode begins with an introductory monologue by Klepper, standing in front of a cork board that is comically overridden with news clippings, red yarn, pushpins and conspiracy theory images. In this monologue, Klepper declares that he has “figured it out,” and generally blames the Democrats for all the world’s troubles. Then he rushes over to his desk, and continues his monologue while seated. Following the opening, the episodes each then center on a news item of the moment, which are of particular interest to conservative media. For instance, in one episode, Klepper offered tips for reclaiming the sport of football, and in another episode, he examined the results of the highly reported Alabama Senate primary election. Other episodes have included topics such as the Russian hacking scandal, Hurricane Maria, gun control, climate change, the internet’s brave truth tellers, the Melania Trump body double conspiracy, Trump’s tax reform plan, a cryptic tweet from James Comey, Betsy DeVos’ role as the Secretary of Education, Trump’s visit to China, and many more.

The public caught wind of Jordan Klepper on The Daily Show with Jon Stewart and in 2015 when Trevor Noah took over the show he moved on with him. Klepper has been in popular skits from the show such as "Are All Cops Racist?" and "Donald Trump to Thank for Increase in Latino Citizenship." both garnering over 1 million views each on YouTube. His fun and witty political humor on The Daily Show eventually led him to his own: The Opposition.

Specifically, of all the influences Klepper is riffing off of, he is most directly referencing Alex Jones, the founder and host of InfoWars, which streams on Periscope and Jones’ own website. This platform agnostic media site has gained a lot of momentum in conservative circles, with its identifying attributes being such actions as ruffling through a mess of printed out articles on his desk, fidgeting while practicing a loud-mannered way of speaking, spouting conspiracy theories, and yelling incredulously as a means of persuasion.

Klepper satirizes these signature habits and more, aiming to provide a rebuttal to more direct fun-poking of The Daily Show through the lens of an indirect funhouse mirror. Like The Colbert Report, which formerly followed The Daily Show with Jon Stewart, The Opposition with Jordan Klepper is hosted by a man playing a conservative character. In this way, The Opposition rounds out the late night evening with a show hosted by a man doing an impression of a host, rather than a more straightforward hosting method. With Klepper’s experience as a correspondent on The Daily Show under the tenure of both Jon Stewart and Trevor Noah, he is well equipped to offer his counterpoint in the show that now immediately follows four times a week.

The Opposition with Jordan Klepper Notes

Although the official address of the Hotel Pennsylvania is located on 7th Avenue in New York City, actual the entrance to this TV studio is located at the side of the hotel, on 33rd street, between 6th and 7th Avenues. If you do happen to to try to enter the studio through the Hotel itself, you will find yourself in a maze of corridors to find the TV studio. It is best to exit the hotel and come back in the side door to the hotel.