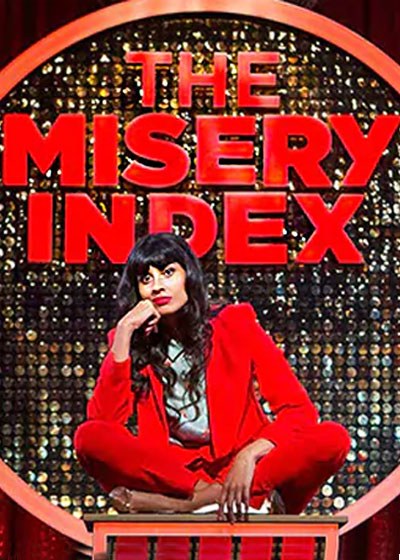 Game show developed solely for TBS based on the popular card game "Shit Happens," which gamifies embarrassment, humiliation, and total misery for laughs.

The show is broadcast at 11PM on TBS

18 years or older to attend

American television comedy game show developed for TBS that premiered on October 22, 2019. The show is based on the popular card game "Shit Happens," which is a game full of shitty situations that you’ll have to rank from bad, to awful, to WTF!

Is a 3rd degree sunburn better or worse than seeing your father naked? Is it worse than dropping your phone in the toilet? Rank the card, and if our Misery Index panel agrees with you, you get to keep it. Correctly rank 10 cards to win!

The Tenderloins and Impractical Jokers

The show hosted by Jameela Jamil, and stars the four members of The Tenderloins comedy troupe who also star in truTV's Impractical Jokers.

Andy Breckman, created and wrote the the popular TV shows Monk and The Good Cop, also created the card game "Shit Happens". He then went on to develop the TV version with Ben & Dan Newmark of Grandma's House Entertainment.

The show features two competing teams, each composed of a non-celebrity contestant and two members of the Tenderloins, who will "attempt to determine the ranking of hilarious and miserable real-life events--from getting fired to accidentally sexting your grandfather--on a scale of 1–100.

Michael Bloom, a senior vice president for TBS, said about the show's premise: "Andy Breckman and the Newmarks have hilariously gamified embarrassment, humiliation, and total misery.