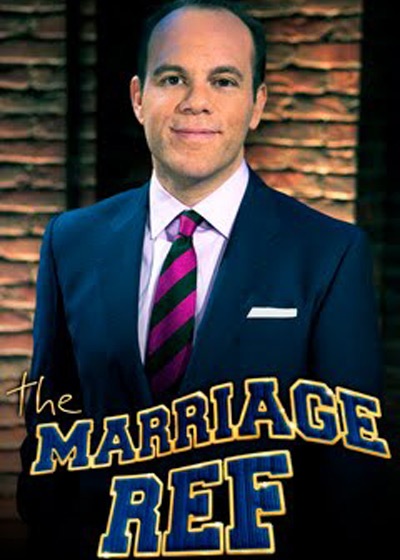 Given The Marriage Ref's comedy/game show style, it has a broad appeal. People who are especially likely to enjoy the show are married couples who can relate to the couples featured on the show, as well as comedy and TV fans interested in seeing the stars sitting in on the show's panel.

The Marriage Ref is not currently accepting ticket requests.

This Jerry Seinfeld brainchild that had comedians deciding the winners of real-life marital squabbles only survived two short seasons. Clearly, NBC would have done a comedy show about the holocaust to get Jerry Seinfeld back.

The brainchild of Jerry Seinfeld, NBC's The Marriage Ref is a type of comedy game show that features real-life couples sharing their silly disputes. Hosted by comedian Tom Papa, the show has a panel of three celebrities who listen to the couples plead their case, then decide who they think should win the argument.

You have to be 18 years or older to attend a taping of The Marriage Ref TV show.

The panel has included a number of well-known comedians, including Larry David, Kathy Griffin, Bill Maher, Ricky Gervais, and Jerry Seinfeld himself, as well as stars from NBC's own sitcoms, such as 30 Rock's Tina Fey and Tracy Morgan, and Community's Joel McHale. The Marriage Ref panel has also included a few big-name film stars and musicians, among them Madonna, Matthew Broderick, and Gwyneth Paltrow.