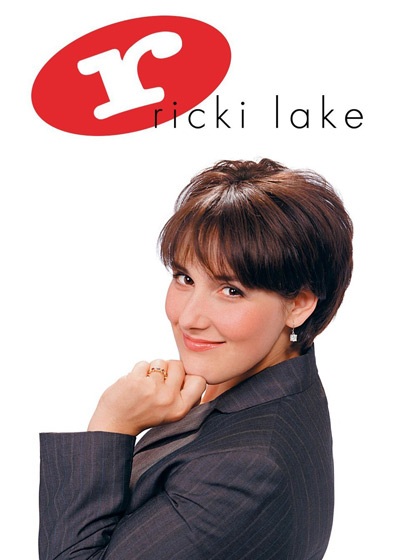 The Ricki Lake TV Show ran for 11 seasons from September 1993 to May 21, 2004. Ricki Lake continued to broadcast reruns all over the TV channel map, but since 2010 interest in the show has dropped off considerably and reruns are now few and far between. Ricki fans were voracious with their chants "Go Ricki!" but given Lake's absence from TV, her brand has languished.

The Ricki Lake TV Show finished its last season in 2004 as part of a very successful national syndication program appealing to many markets. Ricki Lake looks for continued success with her other projects that focus on expanded subjects that not only entertain, but also make a difference in the lives of her audience.

On average the show is booked a month ahead of taping.

Martha Stewart picked up her TV studio, but, alas, Ricki's devoted audience did not stay around to watch that show.

Ricki attempted a comeback show in Hollywood in 2008, which lasted just one season, but sadly, she was not able to garner the old success of her original show Audiences around the nation still love Ricki, and continue to chant "Go Ricki" at her many bar mitzvah appearances.

In the USA the Ricki Lake show is broadcast two to three months after taping. It is usually broadcast out of sequence.

Since its smash debut in 1993, Ricki Lake has remained among the top national daily talk shows in syndication. It is credited with having created a new genre of talk TV and has spawned a slew of imitators that have since come and gone. Ricki Lake was the first talk show to speak to the hearts and minds of a young adult audience, focusing on relationship-driven topics. Ricki’s unique brand of edgy, hip talk for today’s generation continues to evolve, reflecting the tastes of its audience, as well as the many changes in Ricki’s personal life.

Ricki Lake returns to her youthful roots, infusing the show with high energy and lively content. She connects with her audience through a wide variety of entertaining, engaging and thought provoking show topics. From teen pregnancy to gangs and drugs to makeovers and weight loss, Ricki is not afraid to confront the issues that concern her viewers.

Some of the returning signature pieces that have positively affected viewers and audience members’ lives include “My First Time,” “Walk A Day,” “Ricki Makes My Dreams Come True” and “Diary Of…” The series will also continue to build show topics around the popular and suspenseful “Lie Detector” and “DNA Evidence” episodes.

As in the past seasons, Ricki will continue to be pro-active and solution oriented in order to have a greater impact. Contributing experts will also play a key role in resolving conflict on-air, as well as for after-care programs. Whether showcasing her popular signature themes, interacting with audience members and guests, or discussing hot topics selected by viewers, Ricki Lake is once again the voice for today’s generation.

Ricki’s continuing evolution as a television personality always reflects today’s current trends. As a ground breaker of this genre, Ricki Lake looks ahead to a successful eighth season that combines a return to the show’s roots, with the fresh production elements that has made the program successful for so many years.

A versatile actress and performer, Ricki Lake has starred in numerous films and television shows.

Her most recent film credit was the title role in the romantic comedy, "Mrs. Winterbourne," where she starred opposite Shirley MacLaine and Brendan Fraser. Lake made her film debut almost a decade ago in John Waters' offbeat hit "Hairspray" and has since appeared in a variety of Waters' films including, "Cry Baby" and "Serial Mom." Other film credits included "Working Girl," "Cookie," "Inside Monkey Zetterland," "Where The Day Takes You" and "Last Exit to Brooklyn."

Lake also received acclaim for her recurring role as Holly Pelagrino in the ABC television series "China Beach." Her additional television credits include the CBS Movie of the Week, "Baby Cakes." A native of Westchester, New York, Lake knew from childhood that she wanted to be in the public eye. Her first ambition was to become a professional singer. As a result, she began studying privately.

While a student at Ithaca College, Lake heard about a local audition for an untitled film. Within two weeks -- after just one callback -- she landed her debut role in "Hairspray." In this outrageously funny film, she starred as a young woman who wins a place on a local dance program in pre-Beatles Baltimore. Following the success of "Hairspray," Lake moved to Los Angeles, where she balanced her time between her film and television projects.

In 1993, Lake moved to New York City to host "The Ricki Lake TV Show" an innovative new talk show geared toward young adults. In its first season in syndication, the program soared past the competition, making Ricki Lake a household name with audiences around the country. Lake, her husband and son resided in Manhattan along with their two cats, Mollie and Annie, and dog Dudley.