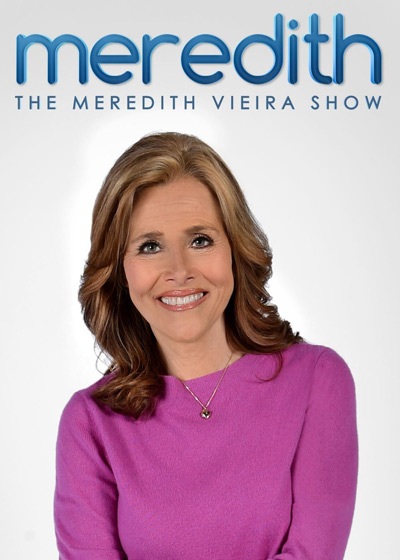 Emmy Award winning television personality Meredith Vieira has joined the ranks of daytime television hosts. Her laid-back, witty and casual demeanor seems to be a perfect fit for the daytime talk show format. The daytime audience, both at home and in the studio, need no introduction to Ms. Vieira. Having been the host of The Today Show, The View and Who Wants to be a Millionaire, she comes well equipped to tackle any news story or situation that is thrown her way. Her show, set in a pseudo-living room, almost seems cozy, and her willingness to show her emotions openly and outwardly, make her a hit with anyone watching.

You can get FREE tickets to The Meredith Vieira Show by going on the show's website and filling out a short form by entering your desired amount of tickets (max is 4) and your contact information.

A popular game show host and reporter, Meredith Vieira was experienced in a variety of television show genres, except talk shows. Unfortunately, the experimental venture into talk show hosting proved to be a failure, and audiences around the world responded with a resounding "meh". The Meredith Vieira Show was cancelled after its second season due to low ratings.

The Meredith Vieira Show is broadcast weekday afternoons at 2:00 PM on Channel 4 WNBC.

She hosted the Lifetime biographic show, Intimate Portrait for eight years. In 1997, she became the co-host and moderator of ABC's The View, where she remained until 2006. During this time, she also took over the hosting duties for Who Wants to be a Millionaire.

When Katie Couric left Today in 2006, Vieira filled the slot, where she remained until 2011. Despite leaving the show, she still remained a special correspondent, returning for events like Queen Elizabeth's Diamond Jubilee and the 2012 and 2014 Olympic Games. Her self titled talk show, The Meredith Vieira Show,debuted in September 2014.

Vieira's likeable and bubbly personality is not just for the television audience. She is genuinely likeable and friendly, and warmly welcomes her studio audience. She officially states that she encourages large groups and audience participation, but in our experience that has not been entirely true. Producers of the show suggest that the audience members dress to impress, as they will be featured a lot on television. Vieira equates being in her studio audience to being invited into her living room (as so much of her furniture is already in the studio, makes you wonder what she has left at her house), so she tries to keep the feel up-close-and-personal. The audience is above 150 people, so making the studio warm and cozy with that number of people is not really possible. The show is shot at NBC Studios and its familiar address of 30 Rockefeller Center (30 Rock) should be familiar to TV audiences that may have seen The Rosie Show, SNL, Dr. Oz or one of the many other TV shows that were shot out of her studio, right across the hall from Jimmy Fallon's Tonight Show Studio and upstairs from SNL. The show provides interesting guests, celebrities, fun and surprises. Tickets are in high demand and that requests be submitted well in advance of your desired attendance.

Her first show had everything from an emotional family gathering (hers), Broadway stars, a karaoke contest between her and Today Show's Hoda Kotb and pop legend Jennifer Lopez. Vieira tries to keep the show flowing despite the varied and unrelated guests and stories. Other shows involved audience participation games that resulted in great prizes or vacations. Noteworthy to Ms. Vieira's show is the addition of a band, something normally reserved for late night talk shows. Other former today hosts like Jane Pauly and Katie Couric have seen their talk shows come and go, however Meredith's seems like it will be here for a while.

In a rare rock star, television show crossover, Everett Bradley, the drummer and backup singer from Bruce Springsteen's E Street Band, serves as the announcer and show band leader. Vieira and Bradley's banter and great chemistry, portray the fun and playful energy of the entire show. This host/band leader interaction is reminiscent of late-night talk shows such as The Late show with David Letterman and Late Night with Seth Meyers.

Deal and Conflicts with ABC:

When ABC decided to syndicate Who Wants To Be A Millionaire, it was decided that popular host Regis Philbin would find the taping of four shows a day to be too arduous. After Rosie O'Donnell (who later went on to become co-host on The View) refused the job, Vieira happily took it. She later went on to receive an Emmy, multiple times for Outstanding Game Show Host. She remains the only female winner in this category except for Betty White. ABC offered her this deal as a way to sweeten the pot and to keep her on The View, where she was extremely popular. When she left for NBC's Today, part of her contract stipulated that she would not compete (with herself, as it was) by being on air opposite Millionaire on ABC. For this reason, she was rarely seen in the third or fourth hour of The Today Show, as ABC affiliates broadcast Millionaire during those time slots.

Be On the Show:

It is no surprise that Vieira actually does want to help improve the lives of her viewers and fans. Some of these opportunities are provided through her show's website. Viewers can submit their story or name and picture under a variety of different headings. Some of these include Making a Dream a Reality (like singing with your favorite band), Wedding Day Do-Overs (to redo disastrous weddings), Helping to Get a Job, Helping to Feed Your Family as well as through more lighthearted subject like Terrible Dad Hair and Pet Dental Checkups. The producers read through the submissions and pick lucky viewers to appear on the show.