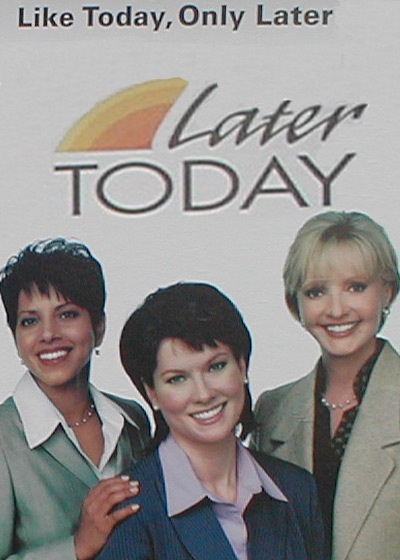 Jodi Applegate, Florence Henderson and Asha Blake host "Later Today" NBC that offers news segments and a bit fun at the 9am slot

This show is Broadcast live from 9am to 10am

NBC's 1999 failed attempt to add another hour to the popular morning news program The Today Show was called Later Today and featured Brady Bunch mom Florence Henderson, Asha Blake and Jodi Applegate. However, the lively morning show only lasted a year as Today Show viewers could not stomach another hour of the same Today show format.

You must be 18 years old to attend this show

Jodi, Asha and Florence will each bring their unique perspectives to the program and Michael Bass has been named executive producer of the program. Applegate said "Michael's creativity, his talent and his tremendous experience will also be key to our success."

Blake was a member of KNBC's afternoon anchor team in Los Angeles. She joined KNBC in October 1998 as an anchor and general assignment reporter. Prior to her work in Los Angeles, Blake served as co-anchor of ABC News'"World News Now" and "World News This Morning" since 1996. Additionally, she co-anchored "Good Morning America Sunday" and served as a substitute news reader on "Good Morning America." Blake also reported on medical issues for a variety of ABC News programs.

Henderson, perhaps best known for her role as Carol Brady on the 1970s series, "The Brady Bunch," is actually returning to the "Today" franchise, having served as a "Today Girl" from 1959-60 with founding anchor Dave Garroway. Her stint on "Today" included conducting interviews, broadcasting live remote shoots and even singing an occasional song on the program.

In what would become her most remembered and beloved role on television, Henderson broke new ground as the star of one of America's longest-running situation comedies, "The Brady Bunch," which aired from 1969-74, and has been shown in 122 countries around the world. Henderson was also the first female host of "The Tonight Show," filling in for Johnny Carson on many occasions and regularly appearing as a guest. Behind the camera Henderson co-produced nine seasons of the Nashville Network cooking, comedy and talk show, "Country Kitchen." The anecdotes and experiences from "Country Kitchen" inspired her cookbook, "A Little Cooking, a Lot of Talking, and a Whole Lot of Fun." In addition, she has been a frequent contributor to "Politically Incorrect" with Bill Maher.

In addition to his new responsibilities with "Later Today," Bass will continue to serve as senior broadcast producer of "Today," a position he has held since 1995. From February 1998 through June 1999, Bass served as executive producer of "Weekend Today," which, during his tenure, reached its highest ratings since the program's inception. Bass joined NBC News in 1989 as a producer on "Today." He was then named supervising producer for "NBC Nightly News with Tom Brokaw" from 1992-94. In conjunction with his responsibilities at NBC News, Bass was also the producer of the Olympic Late Night show during the 1996 Summer Olympics for NBC Sports. He served as the Olympic Senior Profiles Producer from 1990-92, and as an Olympic Profiles Producer from 1986-88. During his tenure with NBC Sports and the Olympics, Bass won five National Sports Emmys. Prior to joining NBC, Bass was a writer and researcher for ABC Sports and an Olympic Researcher for the network during the 1984 Winter Olympic Games in Sarajevo and the 1984 Summer Olympic Games in Los Angeles.

"Later Today" is being developed by NBC News to capitalize on the enormous success and lead-in of the network's morning news leader "Today." The program format will be a mixture of news, entertainment and issue-related segments, covering everything from medical advice, parenting, and fashion to health, financial matters, cooking and fitness. A live studio audience at NBC's New York headquarters in Rockefeller Plaza will also be a key component of the show.