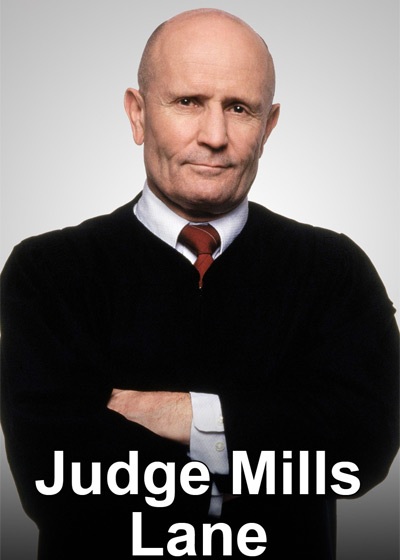 Judge Mills Lane is a Court TV show where the celebrity boxing referee and notable Judge Mills Lane gives us his no-holds-barred approach to petty justice in front of a live studio audience.

Free tickets are available for this show

This show tapes all year round

Judge Mills Lane, also known for being a professional boxing referee, stared in his own reality court show on TNN. The show was cancelled after three seasons due to an increasingly crowded court TV drama market, where shows like People's Court ruled the roost.

Judge Mills Lane is the grandson of Mills Bee Lane, the man who created Georgia’s Citizens and Southern Bank, the largest in the state. After attending Middlesex, a Concord, Massachusetts preparatory school, and following his acceptance to the University of Michigan in 1956, it seemed that his future was carved in stone. He would attend college and return home to Combahee, his father’s 11,000 acre South Carolina plantation. If he tired of farming, he would pursue a career in the family banking business. But Mills was a man who wanted to make his own decisions, which is why he ended up in the Marine Corps on August 13, 1956. It was there that he learned the meaning of discipline and the finer points of boxing; going on to win the Welterweight Championship while stationed in Okinawa. After an honorable discharge in August 1959, Mills tried to enroll at the University of Nevada-Reno because he read an article that touted the University’s boxing program. But because of less than stellar grades at middle school, he had to attend summer school at the University of South Carolina and Armstrong Junior College in Savannah before gaining admission to UNR in the winter of 1960. He chose business administration for his major and minored in left hooks and right crosses. In 1960, he won the NCAA Welterweight title; barely missed the Olympic Team cut; had an amateur boxing record of 60 wins and 4 losses; all while carrying a B plus average. In the fall of 1964, Mills realized that the skills he honed as a boxer would also enable him to make a great referee -- he landed his first gig at a University of Nevada collegiate match for which he earned a grand total of $10. Once he felt comfortable managing the amateur bouts, Mills contacted the director of the Nevada State Athletic Commission and began to referee on a professional level. During his first five years as a referee, Mills was also employed by the Reno Security National Bank’s loan office, where he repossessed cars for a living.He graduated from the University of Utah’s College of Law in 1970 and passed the Nevada bar exam before going to work for the Washoe County District Attorney’s office as a trial prosecutor in 1971. In the same year, Mills refereed his first world championship bout and three decades later, the job continues to thrill him. Mills says that he "still gets a kick out of the excitement that is generated by a big fight, rubbing elbows with those who I consider to be some of the greatest athletes in the world." In 1979, Mills left the D.A.’s office and began working as chief deputy sheriff and special prosecutor for two years. In 1982, he was elected District Attorney of Washoe County and in 1990 was elected District Judge.

On April 30, 1998, Mills Lane stepped down from his legal position in Reno and stepped up to a new bench in the courtroom series, Judge Mills Lane. The show got a leader as Mills Lane had just completed his autobiography, Let’s Get It On (Crown Publisher, Inc.) which went on to become a best-seller. The feisty Mills Lane, who was previously a boxing referee, hosted this show for three seasons. His TV show was never able to eclipse his most famous bout where Tyson bit Holyfield's ear.