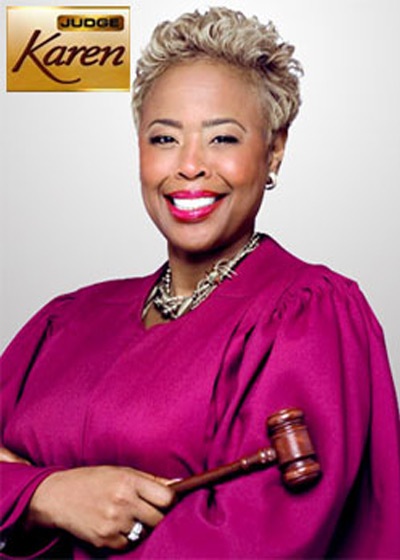 After just one season, 2008-2009, Judge Karen was cancelled in New York City. Reruns of this original New York show are being televised on the BET Network and TV One network.

The Judge Karen TV show does not accept postal requests for advance tickets. Advance tickets for future shows can only be requested over the internet or by phone.

The Judge Karen TV Show tapes on the following tape times and days:

No-nonsense Miami judge Karen Francis-Mills only ruled for a short time before her court show was canceled due to lack of ratings. Her show was a blatant attempt to cash in the recent scourge of Judge shows. She went on to prosecute more fake criminals in Law and Order SVU.

The Judge Karen Francis-Mills show is a syndicated TV Show that is transmitted on different TV stations at different times across the US, so check your local listings for the TV channel and time.

You must be 18 years old to attend this taping

Judge Karen came back with two new incarnations of the show: Judge Karen's Court in 2010 and Supreme Justice with Judge Karen in 2013, which both were shot in Los Angeles.

Judge Karen Francis-Mills is an opinionated and sassy jurist who hails from Miami, where she earned her law degree from the University of Florida Law School and worked as a public defender. Driven by the lack of diversity in the court system, Judge Karen ran for a Miami judgeship in 2000 (an elected position), and overthrew a long time incumbent to become the second black woman ever seated on the bench in Miami-Dade County. Sharp and tough but sensitive to all, Judge Karen Mills-Francis is a savvy, no-nonsense judge who is bringing her unique style of edgy justice and flair to daytime court television.