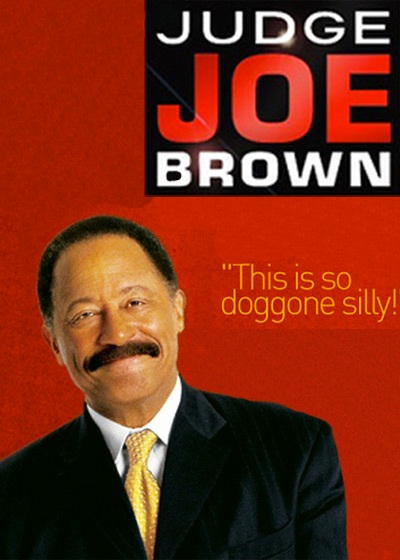 Judge Joe Brown, the second highest-rated court show after Judge Judy was cancelled by CBS. The cancellation is believed to have taken place after a fall out on a new contract that trimmed Brown's salary.

"I listen to young people talk about what's happening in their world, and I tell them about how I survived South Central," says Judge Brown. "Because I overcame the street life and got a good education, they tend to listen to me more than most adults, and I think I give them hope. My goal is to encourage them to become productive members of society, instead of potential inmates who waste away their young lives. Judge Brown sees his work on television as the “best way possible” to spread the word and make a difference, just like his parents did while he was growing up. To commemorate his work with inner-city youth, Judge Brown was honored at the Kennedy Center with The Olender Foundation’s Advocate for Justice Award. He has also received many other awards in recognition of his innovation and service as a jurist, community leader and for his successful effort to demonstrate the law to millions of Americans via JUDGE JOE BROWN. “It's simple,” he says. “People should be kind, caring and humane. When they are not, it's my job to try and turn them around. Judge Brown has been featured in many high profile television shows such as "Entertainment Tonight," Black Entertainment Television's "How I'm Living," Court TV's "Catherine Crier Live," and CNN's "Crossfire," to name a few. He has also been the focus of numerous print stories that have appeared in widely read publications such as Ebony Magazine, Jet, People, Vibe, USA Today, and The New York Post, among others. The father of two sons, Judge Brown currently divides his time between homes in Los Angeles and Memphis with his new wife, Deborah Herron Brown, whom he married in December 2001. When he's not presiding in the courtroom, he enjoys pursuing his hobbies of scuba diving, skiing and swimming with sharks (literally!)

From 1990 to April 2000, Judge Brown served as a judge of the Shelby County Criminal Courts in Memphis, Tennessee, where he introduced a new way of sentencing first time, non-violent offenders with riveting results. His unusual methods of administering justice resulted from his childhood. Born in Washington, D.C., the only child of hard-working teachers, he relocated to South Central Los Angeles as a young boy, where he formed his tough-love philosophy early on.

“I grew up in one of the toughest neighborhoods in South Central Los Angeles,” he says.

“If you saw the movie, 'Boyz 'n the Hood,' that was the way I grew up. I watched my parents tough it out on a daily basis, and I saw that what really kept them going was making a difference to others. That's why today, 'making a difference to others' is everything I'm about. While nearly everyone in his neighborhood fell victim to the harsh realities and circumstances of living in the inner city, Brown chose education instead. His family later moved to the Crenshaw area, where he graduated from Dorsey High School at the top of his class. He went on to major in political science at UCLA, paying for his tuition by loading trucks and digging ditches. When a friend suggested he try out law school, Brown became intrigued by the possibility of pursuing a legal career. It turned out to be a perfect fit. Brown was a brilliant student and earned his law degree from UCLA while working as a substitute teacher. Upon graduation in 1973, he moved to Memphis, Tennessee, to take a position first with Legal Services, and then with the Equal Employment Opportunity Commission (E.E.O.C.). Within five years, he became the first African-American prosecutor for the City of Memphis, and then director of the City of Memphis Public Defender's Office. Soon after, he launched his own private practice and in 1990, returned to public service. Recognized for his sincerity, passion and justice, Joe Brown was soon elected Judge of Division 9 of the State Criminal Courts for Shelby County.

Judge Brown was already known for his creative alternative sentencing. In fact, it’s what thrust him into the national spotlight. His national recognition was further intensified after he was assigned to reopen the case of the late James Earl Ray, convicted assassin of the late Martin Luther King, Jr. Today, he often spends his weekends in the toughest parts of Memphis, following up on cases, and helping kids and teens to stay out of trouble and steer clear of activities that could put them in jail -- or a coffin.