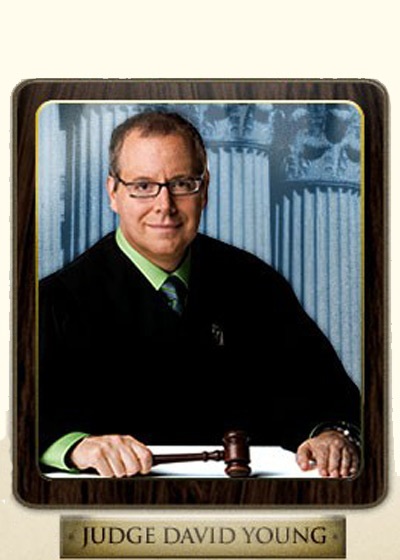 After years of doling out justice on the bench in his native Florida, Judge David Young is now in New York, where he tapes his own TV judge show. Delivering "Justice with a snap," the openly gay law man handles small claims court cases on his half-hour show. He is accompanied by "sidekick" Bailiff Tawya Young (no relation), who brings some local flavor to the show, having served as a lieutenant at Brooklyn's small claims court. The flamboyant Judge Young is known for his attitude and it's not unusual for him to break out into singing showtunes in the middle of a case. Prior to having his own TV show, he was a Florida assistant state attorney under Janet Reno and later served as a County Court Judge in Miami. Judge David Young's most famous case was in 2005, when he sentenced two America West pilots to attempting to operate a plane while under the influence of alcohol.Michael Rourke serves as executive producer on Judge David Young, and Rourke is no stranger to daytime TV, having worked on Ricki Lake's show and Judge Hatchett. A Sony Pictures Television show, Judge David Young is nationally syndicated and airs on weekdays at varying times on various channels.

The Judge David Young TV show does not accept postal or email requests for advance tickets. Advance tickets for future shows can only be requested over the internet.

The Judge David Young show is a syndicated TV Show that is transmitted on different TV stations at different times across the US, so check your local listings for the TV channel and time.

Many of the people who like to attend Judge David Young are legal enthusiasts who like to learn a little about the law in an easy-going and entertaining setting.