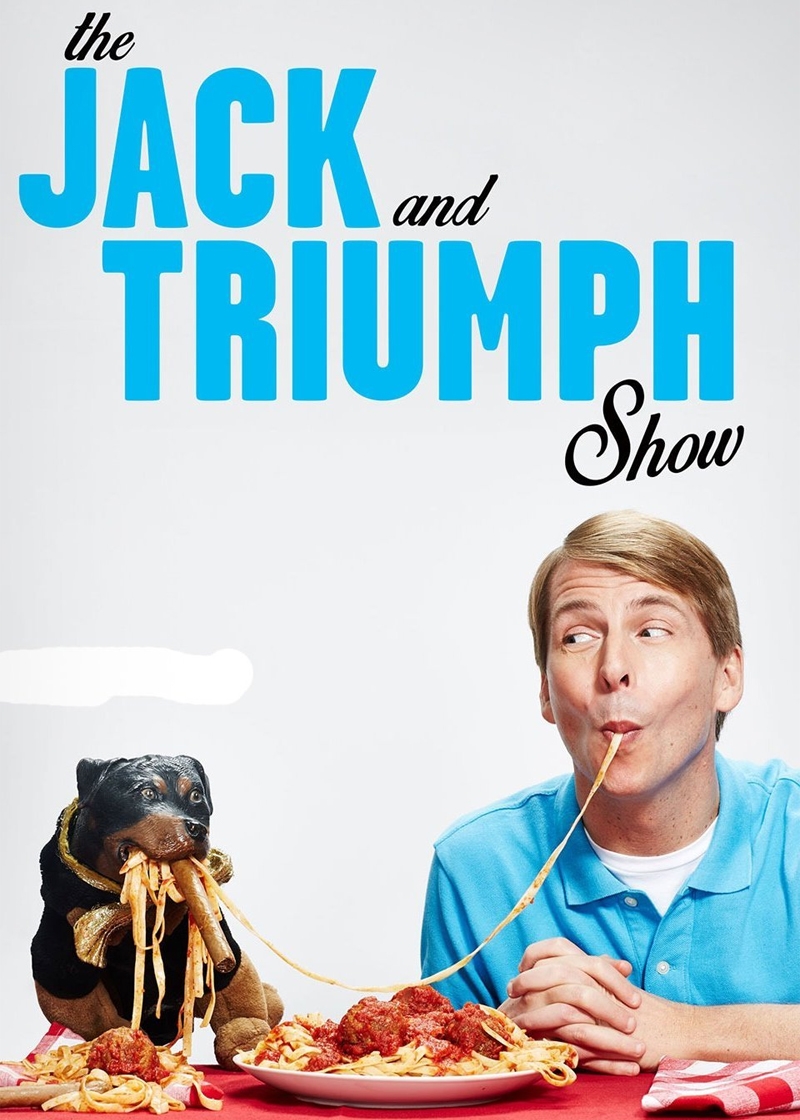 The Jack and Triumph Show is a live sitcom TV show shot in New York City developed by Michael Koman and Robert Smigel. The show stars Jack McBrayer and Triumph the insult comic dog star as an acting duo who had great success in a "Lassie" like TV show in the 1990's, but further success eluded them as they grew older and they never achieved the fame that they once had. In the show, Triumph went on to a life of decadence and excess, causing him to be a polarizing influence on the duo and Jack's career stalled after a number of poor choices.

You can get free tickets to The Jack and Triumph Show by going to the show's website and filling out a short form including your name, email address and your desired show date.

The Jack and Triumph Show is taping thirteen episodes per season. They tape the show once per week at 8:00 PM on Thursday nights.

Jack McBrayer and his stuffed dog starred in this partly-improv, partly-scripted comedy show. This under-the-radar TV show premiered on February 20, 2015, and had its final episode was on April 3, 2015, after a slim seven episodes.

The Jack and Triumph Show is broadcast once per week on Saturday night at 10:00 PM to 10:30 PM on the Adult Swim channel which appears on all major cable carriers across the United States. The channel shares space with Cartoon Network. Adult Swim is operational on the channel every night from 8:00 PM until 6:00 AM with Cartoon Network using the channel at the opposite times. Both channels are are owned by Turner Broadcasting System which allows this consideration to happen.

You must be at least 18 years old to attend The Jack and Triumph Show taping and be able to present a government issued ID to demonstrate age.

Jack McBrayer had success in his role as NBC page Kenneth Parcell on the NBC prime time comedy 30 Rock which ran for 7 seasons, from 2006 to 2013. McBrayer is native of Macon, Georgia where he studied theater administration at the University of Evansville.

Voiced and operated by Robert Smigel, Triumph The Comic Insult Dog started out on the Conan O'Brien show in 1997 and has made varied appearances on Conan on TBS and the TV Funhouse. His best bits were on segments where he interviews Star Wars fans on line for the new movie and questions fans at a Jon Bon Jovi concert.

Some of the basic parts of this TV show are scripted, but in a curb-your-enthusiasm kind of way, the stars of this show are allowed to run away with many unscripted scenes, which adds to the spontaneity and makes the show a great deal more interesting to watch from an audience member perspective than a traditional viewing of a sit-com, which is so often pre-taped. The show is, at times, almost like an out-of-control improv with the production team running ragged to keep up with the talent who are taking the show in a whole new direction almost every minute. The comedy feels so natural that it is not clear to the studio audience (and the viewers at home) which lines are scripted and which ones are off-the-cuff improv. The show is not all good news though, many of the scenes are pre-shot on location. The creators of the show, Michael Koman and Robert Smigel, have come up with reasons in the plot that force Jack and Triumph to go outside their home and integrate with "real" people, but they try to stay away from using Jack or Triumph as a reporter, which is where Triumph (and his voice and handler Smigel) have a great deal of experience with, as this is where the character of Triumph started all the way back in 1997. These scenes are pre-taped and the audience just watches along and their reaction shots are recorded.

The Jack and Triumph Show is shot in a live sitcom format, that has not been seen since the days of the Cosby show. All sitcoms are now shot in Hollywood without an audience and later played back to an audience that provides the reaction sounds and applause. The live sitcom format is a rare and forgotten art form of TV production as most TV production companies shy away from it due to cost, logistics and overall difficulty of pulling it off. The show is shot at the NEP TV studios, across the street from Madison Square Garden and Penn Station. The show uses an invited live studio audience during taping. Celebrity guest stars join the TV show for a single episode. For the first episode, Joey Fatone made an appearance as one of Triumph's poker playing friends from the "old days."

The show story format is that long after Jack and Triumphs successful TV show run back in the 1990's, both have fallen onto harder times. The show begins with Triumph invading Jack's house where he lives with an old lady (that is not related to him) Triumph immediately takes over the house and brings his poker buddies over, who he was friends with back in the 90's. Other than Joey Fatone, other poker buddies that appear on the show include Leonard Maltin the movie critic and Tay Zonday (the internet sensation, Chocolate Rain) Other celebrities that appear on the show are Rachel Ray, Don Cheadle, Katy Perry and Conan O Brien.

Ironically the TV show is supposed to be in Jack's house which is in Glendale, on the outskirts of Los Angeles, an area of California which is full of other child stars from that era, that have also done nothing else with their life. So the TV show is essentially a reverse Seinfeld, the show is actually shot in NY, using a set that is a house in Los Angeles, whereas Seinfeld's show was shot in LA and used a set that is an apartment in New York City.