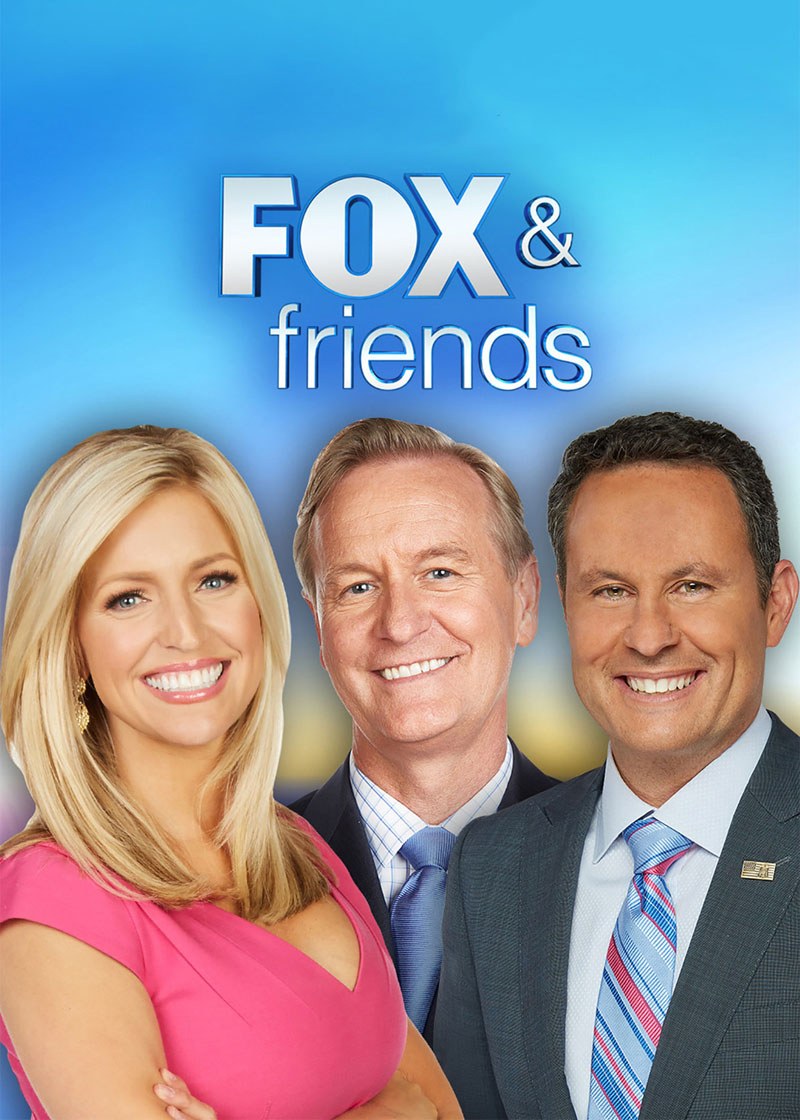 Fox and Friends is a morning news TV show with rotating hosts. Consisting of celebrity interviews and right-wing political discussions based on current events.

This TV show does not have a live audience. However, you can watch it live every week day on FOX.

Fox and Friends tapes live every weekday from 6AM to 9AM.

Fox and Friends is transmitted in New York City area, on Time Warner channel 202 and Verizon FIOS 118. The show is broadcast from 6:00 AM to 9:00 AM every weekday.

Unlike most of the morning show television programs broadcast from New York City, Fox and Friends does not have a live studio audience, either in the studio or on the street.

The show is shot at Fox Studios in its brand new state of the art studios, constructed at the corner of 48th and Sixth Avenue in the heart of Rockefeller Center. The new studio has a giant news ticker running on the outside of the building, broadcasting the latest news to passersby.

Another studio, Studio D, where Huckabee is filmed has room and includes a studio audience, but Studio E, home of Fox and Friends, does not. Oddly though, the sofa upon which the hosts sit, is in front of a window where the silhouettes of passersby are easily seen.

In spite of the lack of a studio audience, the show does feature certain human interest segments, like cooking, lifestyle and relationships. However the cooking is done for the hosts by a celebrity chef and only seen by the viewing audience at home. During the summer months, the outdoor space is utilized by the All American Concert Series for famous musical acts from the heartland that are more likely to appeal to their viewers.

It is a surprise that this show is not shot in a more appropriate conservative locale such as Houston, Texas or Oklahoma City, where most of the shows viewers reside.

The show is a combination of news, weather, interviews, and human interest stories, as well as occasional segments for entertainment and cooking. It is currently ranked number one among cable morning news shows.

The show began in 1998 as Fox X-Press. After 9/11, an additional hour entitled Fox and Friends First was added to the show. Eventually, the entire three hour show settled on the Fox and Friends title. Although the accuracy of the news may be sub par, no one can complain about production values, which are very high.

The show is well funded by Fox News. Everything from the set to the computer graphics are top notch, giving the program a sleek, modern look. That being said, Fox and Friends have suffered from news accuracy problems and has been questioned as a credible news source on many occasions. The TV audience for Fox and Friends does not seem to mind about the news accuracy issues and continues to remain loyal to the show.

With the addition of Hasselbeck and the new "curvy couch," Fox and Friends scored a home run with their demographic. The show's target audience is: Middle America, non-college educated republican leaning viewers. To that demographic, the show is a cheery, morning news show. To the other parts of the demographic spectrum, the show is a source of mildly entertaining news but with some concerning accuracy flaws. Moreover, Fox and Friends has been accused by liberal pundits of often being politically incorrect, ignorant, racist, borderline sexist and providing news misinformation.

The show does, however, provide a counter to the often liberal media that exists on the other television channels. Fox and Friends has made no bones about its aspirations about wanting to become the number one broadcast network morning show on the Fox Network TV channel (channel 5 in NYC). This would replace the existing show in that slot, Good Day New York with Rosanna Scotto, Greg Kelly and Mike Woods. With Fox and Friends viewership numbers increasing year over year, there is a distinct possibility that they might just pull that off.

Noteworthy Dates for Fox and Friends: