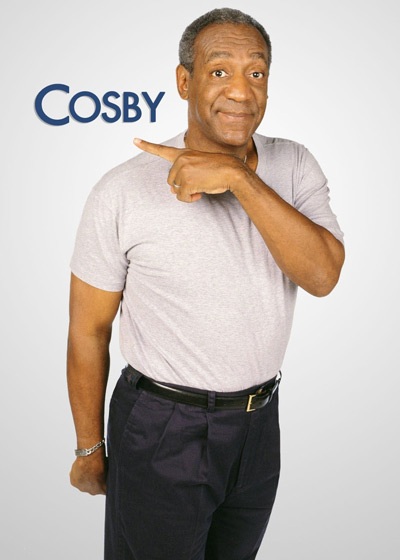 Three years after The Cosby Show was cancelled in 1992, Bill Cosby had this other TV show entitled "Cosby" that was filmed in NYC and ran from 1995 till early 2000 for a total of 95 episodes.

Audience tickets to this TV show are no longer available.

Cosby filmed 95 episodes for five seasons over 1996-2000 taping seasons. Mr. Cosby filmed a total of 8 shows in 2 days. This TV show has been cancelled by the TV network.

Long before the string of accusations of sexual misconduct and in a bid to resurrect his success as Dr. Huxtable on the Cosby Show (which ran from 1984 to 1992), Bill Cosby unsuccessfully tried his hand at one more sitcom before finally nailing his TV show coffin shut. The show did poorly in the ratings but managed to squeeze out four seasons from 1996 to 2000, before getting the axe. The show maybe only lasted mostly due to the juice Cosby had over TV execs, rather than the show's ratings or critical reviews. It is hard for anyone to actually remember this show, thank God for YouTube.

Cosby aired on Monday at 8 PM on NBC for the first three seasons. The fourth season aired on NBC on Wednesday at 8 PM and then moved to Friday at 8:30 PM.

Despite being a ground breaking African American actor and comedian, Bill Cosby will be more likely be remembered as a serial rapist that drugged and raped women during his successful years.

Bill Cosby received many ground breaking accolades during his comedy career, but all those accomplishments have sadly been nullified by the accusations and convictions of rape he has received in his later years, of which he still denies.

The show plot involved Bill Cosby, who plays Hilton Lucas, who was forced to retire by his employer Lockheed Martin when he was only sixty years old. His wife has trouble with him always being at home with nothing to do and Lucas also does not know what to do with himself other than riff off others in his household. The show did not feel original in any way and felt like a bad version of the original Cosby Show, especially given that original Cosby show co-stars also appeared on this reboot show, but under different character names. Confused? So are we.

Bill Cosby had a runaway success on primetime TV as Dr. Huxtable on The Cosby Show, which ran for 197 episodes from 1984-1992 and garnered huge TV audiences. Long before his sexual assault convictions in 2018, Bill Cosby had another TV show entitled "Cosby" that was filmed in NYC and ran from 1995 till early 2000 for a total of 95 episodes.

Cosby had a great take on the funny side of life, especially with his intended lovable character, Hilton Lucas This devoted husband and father, whose life is turned upside down when he finds himself living next to a children's daycare center and working at a trendy designer coffee shop. The show is cast with warmth, honesty and humor, Hilton faces the new world of the bewildering '90s for a retiree than no longer is on the fast track to life. Phylicia Rashad co-stars as Hilton's patient but also his sassy wife Ruth. Also part of this all-star cast is Madeline Kahn as Pauline, a family friend whose sharp wit makes her every bit a match for the outspoken Hilton. Rounding out this ensemble is T'keyah Crystal Keymch as Hilton and Ruth's daughter Erica, and Doug E. Doug as Hilton's nosy neighbor and comic sidekick Griffin, who gets most of the laughs for Cosby's deadpan setups.

Similarities to The Cosby Show

The show had more than a familiar feel about it, as it looked very much like The Cosby Show, but it was different in a few ways. The show was shot in NYC, as opposed to the original The Cosby Show which was shot in Los Angeles. The show was also produced and aired on NBC for the whole of its run as opposed to the original show being on CBS. The show taping in NYC was convenient for Cosby, who lives in Shelburne Falls, Massachusetts, Cosby would get on his plane at the Springfield airport in Massachusetts and fly into LaGuardia airport in Queens to shoot the show a couple of times a week, so it was perfect for him.