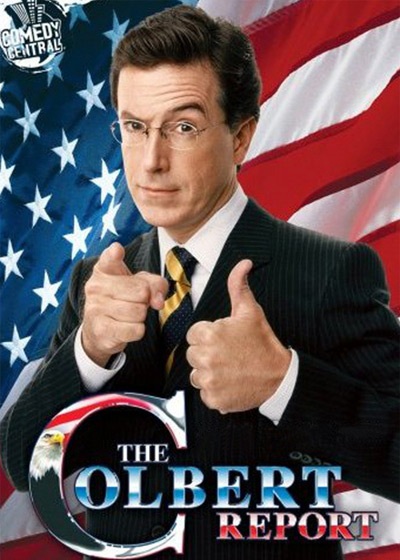 The Colbert Report is a faux news program that works as a great companion show to the very popular Daily Show with Jon Stewart. Stephen Colbert has taken his news correspondent job on The Daily Show to a whole new level in his self-titled The Colbert Report. Colbert's show has its own spin and the correspondent role which he created on The Daily Show has developed into a new format that features Colbert's views on current news events, plus interviews with those making the headlines. The Colbert Report is in the mold of the cable news shows helmed by "news personalities" like Bill O'Reilly and Anderson Cooper, but with a satirical edge.

You can only attend a taping of The Colbert Report TV show once in a six month period (unless specifically invited back to another taping by a Colbert Report staff member).

The Colbert Report TV show does not accept postal or phone requests for advance tickets.

Advance tickets for future shows can only be requested over the internet.

Stephen Colbert provided entertaining commentary on real issues going on in the around the world. The Colbert reported aired its last episode on December 18, 2014 on Comedy Central, and enjoyed 1,447 episodes.

Stephen Colbert is an American comedian and television host. He is known for his appearance on Comedy Central's The Daily Show which introduced him to a wide audience. He also performed on the Dana Carvey Show and Strangers with Candy. Colbert won several awards including nine Primetime Emmy Awards and two Grammy Awards. Stephen Colbert was born and raised in South Carolina, Colbert began making a name for himself in Chicago as a member of the famed Second City improv troupe where he met Amy Sedaris and Paul Dinello
.
After several years at Second City, the threesome moved to New York City and, along with others, developed Exit 57, a half-hour sketch comedy series for HBO Downtown Productions which ran for two seasons during the mid-'90s on Comedy Central. Exit 57 received five CableACE nominations for best writing, performing and comedy series.

Colbert reunited with Sedaris and Dinello to create Comedy Central's first ever, live-action, narrative series, Strangers with Candy, a twisted take on the classic and typically moralistic afterschool specials. Colbert also starred opposite Will Ferrell and Nicole Kidman in Bewitched; wrote and was a cast member on The Dana Carvey Show; appeared in commercials for GM "Mr. Goodwrench;" wrote for Saturday Night Live and was the voice of Ace on the animated SNL series "The Ambiguously Gay Duo."