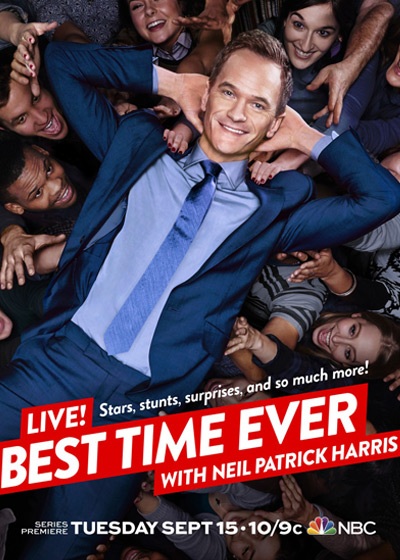 Neil Patrick Harris (NPH), the beloved multi hyphenate whose credits include Broadway star (In Hedwig and the Angry Inch), awards show host (the Tony Awards on several occasions, and more recently the Academy Awards) and television actor (How I Met Your Mother, Doogie Howser, M.D.) now has one more title to add to his name: variety show host and it is here in New York City.

There are tickets currently available for Best Time Ever with Neil Patrick Harris. By going on the external audience management company's website 1iota, you will be able to join a waitlist for the dates available.

This show tapes LIVE every Tuesday night at 8:00 PM

The name apparently did not fit the show. Given a dismal 26% rating on Rotten Tomatoes, critics and audiences alike agreed that one season of eight episodes was too many for this failed variety show. The cancellation of this TV show was announced in 2015.

Best Time Ever with Neil Patrick Harris aired on Tuesday nights on NBC 4TV . The first two shows aired at 10:00 PM due to TV broadcast scheduling conflicts with America's Got Talent. All shows after, aired at 8:00 PM, which maximized viewership.

Yes, this show is family-friendly. Some of the subject matter may be adult themed and parents should be advised. As this show is still in development, the age limit to view tapings has not yet been determined.

Neil Patrick Harris is a beloved actor of stage and screen, as well as experienced host of awards shows, including the Tony Awards and the Academy Awards. Now for the first time, Harris takes the stage as variety show host with this new television series on NBC. The nature of the variety show format perfectly suits Harris’ strengths, as he can flex his muscles in everything from musical performance to comedic sketches. Among other successes, his unparalleled star power is evidenced by his recent turn as Hedwig in Broadway’s Hedwig and the Angry Inch, for which he received the Tony Award for Best Actor in a Musical.

Best Time Ever with Neil Patrick Harris has been described as a modern version of the Ed Sullivan Variety Show, but with a much faster pace for modern audiences who commonly suffer from A.D.D. In truth, the show bears no resemblance to that format and is best described through its various skits which it inherited from the British show Ant and Dec's Saturday Night Takeaway, that has been running for twelve seasons in the UK.

The TV demographic for this show could not be more different from AGT and other NBC TV shows as producers are making no bones about it, this show is for young people. Even at the taping young people dominate the camera time in the audience and they need to be good looking for the camera. This younger group is clearly the intended TV audience and TV producers are trying everything to woo the millennial's back in front of the television, where NBC can monetize them through commercials. NBC rolls strong tie-ins to social media attaching the Best Time Ever brand to Twitter, Facebook, YouTube, Twitter, Tumblr, Instagram and Google Plus.

NBC has created a 10 episode season of a new variety show hosted by Neil Patrick Harris that is produced by ITV Studios America, a network principally based in the United Kingdom. In the vein of ITV’s popular series Ant and Dec’s Saturday Night Takeaway, this new variety show will feature an array of different acts including comedy sketches, mini game shows, musical performances, A-list Hollywood guest stars, and celebrity pranks in the style of Ashton Kutcher’s Punk’d.

The variety nature of the show is perfectly suited for the versatile Neil Patrick Harris, who turned down the coveted position held for many years by David Letterman to host The Late Show on CBS, as a straight talk show format did not appeal to him. Therefore, his new show will not a have a simply straight format in any way, as the varied programming on this show will allow Harris to showcase his many talents, as well as a diverse array of guest stars.

Not only is the chance to see Neil Patrick Harris live enough of a draw, but the live studio audience will be treated to performances of the musical and comedic variety, in addition to a series of surprise celebrity guests. Some of the bits such as the hidden camera pranks on celebrities will have been filmed beforehand, the majority of experiences are being performed live in front of the studio audience.

The Neil Patrick Harris (NPHVS) TV series is based on the original UK series Saturday Night Takeaway, which is hosted by the UK's very own, Ant and Dec. The UK show, and its hosts, are largely unknown stateside, but do pop up occasionally on reruns of Britain's Got Talent where Susan Boyle, Paul Potts, Kate Nicholas and Ronan Park were discovered. The hosts of Saturday Night Takeaway, Ant and Dec, do not have any stage talent per se, other some smart banter and the odd bit of clever repartee. The production company developing the new show (ITV) has solid experience developing the original show in the UK, but Neil Patrick Harris is a very different talent as he has boatloads of on-screen comedy, drama, singing dancing and all-around showman experience.

ITV has its hands full in developing a show that can fully utilize Harris's talents without throwing out the whole show formula.