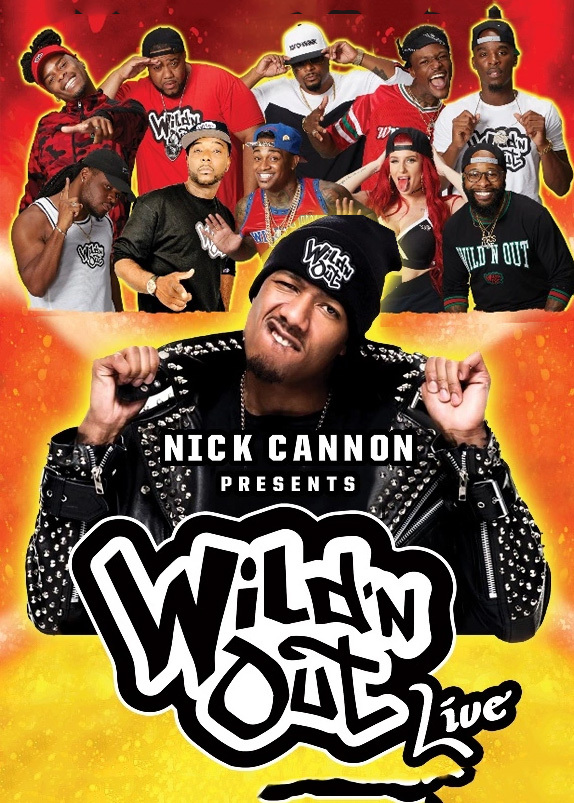 Wild'n Out LIVE is a spin-off of the original Wild'n Out. Nick Cannon is giving up-and-coming comedians a chance to rap against him in the Wildstyle rap battle.

You can get FREE tickets to WIld'n Out Live in Times Square by going to the TV show's external ticketing website and request a limit of 1 ticket. You can also get paid $40 for attending the entire taping.

Wild'n Out Live tapes every Thursday evening at 8PM at Viacom Studios at Times Square. You must be at the studio no later than 7:30PM. Taping will being at 8PM sharp.

Wild'n Out Live is broadcast at 9PM every Thursday night on MTV.

You must be at least 21 years old to attend this taping as there will be alcohol served. You must bring a government-issued ID.

Nick Cannon is mostly known for his appearance in America's Got Talent as the TV show's host for 8 seasons. After recently being fired from that show, Cannon decided to evolve his most successful venture throughout his career into a live format, Wild'n Out Live in Times Square.

Since then, he's had a baby, Golden Sagon Cannon and also divorced his wife, Mariah Carey of 6 years all within the same year.

A live version of Wild’n Out, that is even more crazier than its taped brethren. This show features a local NYC crowd and its held together by Nicl Cannon and some duct tape.

Audience Members Get Paid to Attend

In addition to the extra cash you’re awarded for being an audience member at Wild’n Out LIVE, you also have a good time.

Upon entering the studio, one of the cast members introduces himself and makes several corny jokes picking on some of the audience members. They tell the audience about the rules and most importantly, to act like Wild’n Out LIVE is one big party. Once the taping begins however, the party gets rolling. Nick Cannon comes out from behind a curtain and starts DJing and everyone claps and ‘whoop, whoops! start’

The “So You Wanna Wild Out” contestants are introduced and one by one they rap battle Nick Cannon, but it’s clear that the final person up for Wildstyle is the one who will always win. In between takes, the atmosphere of the show stays the same. Like its on fire and there is no extinguisher within 20 blocks.

Party Atmosphere Before and After Taping Stops

After the crowd warms up, everyone starts mingling and after a half hour, the taping starts feeling like an actual party. Before even setting foot in the building you are given two drink tickets, so after the first segment of Wild’n Out you are allowed to trade the tickets for white or red wine or beer. There is no food at the taping; however a big bowl of candy sits right by the alcohol just for you. Although it is stated NOT to use your phone during tapings, Nick Cannon encourages it, so snap away!

New York TV Shows Are Usually Pretty Fake, But Not This One

This show really is a party and despite its high production costs and limited tickets, it is an experience like no other TV taping. Even the regular Wild'n Out TV show is lame when it is compared.

So You Wanna Wild Out?

The competition which will run for 20 weeks is called "So You Wanna Wild Out."

Three contestants are put to the rap test. The one who raps the best punch lines, flies out to L.A. to become one of the members on Wild'n Out and wins their own Wild'n Out Championship Belt. The victor is decided by a combination of Nick Cannon and social media feedback via Twitter. This brings Millennial and GenZ viewers to watch the show live, something they normally would not do.

If something looks familiar it is because Nick Cannon brought Wild'n Out LIVE to TRL's (Total Request Live) old stomping grounds at the Times Square Studios in New York City. A young and hip audience is paired along with New York City's most colorful personality.

Stars of Wild'n Out Live

Wild'n Out Live stars at least two of the regular Wild'n Out cast members and the Wild'n Out Girls. DC Young Fly, Conceited, Chico Bean, and Justina Valentine are usually featured on the LIVE TV show