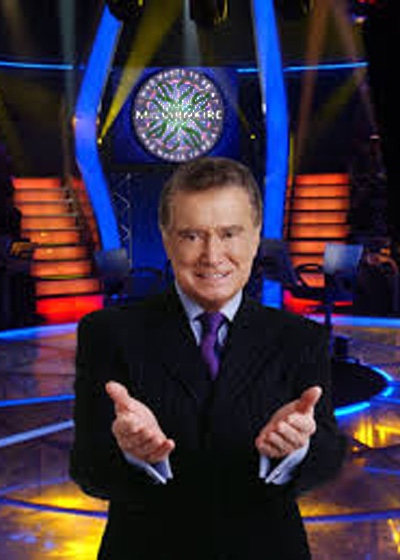 Who Wants To Be A Millionaire (NY)

Free TV Tickets For Who Wants To Be A Millionaire (NY)

Who Wants To Be A Millionaire (NY) Summary

The US version of Who Wants To Be A Millionaire TV show began in 1999 and copied the original British TV show of the same name. The US show made history by becoming the first U.S. network game show with a top prize of 1 million dollars. The show has seen a variety of taping locations and hosts.

Who Wants To Be A Millionaire (NY) Ticket Information

You can get FREE tickets directly from Who Wants to Be a Millionaire. On the TV show's website, fill a short online form including a desired date, the quantity of tickets, name, address, email address and phone number.

Who Wants To Be A Millionaire (NY) Show Schedule

The show tapes practically every day during their taping season. They tape five shows a day and have both morning and afternoon sessions that begin at 10AM and 2PM. This show tapes from June - October.

Who Wants To Be A Millionaire (NY) Cancellation Details

The show originally aired on Broadcast TV with Regis Philbin at the helm in 1999. As audience ratings cooled, the show moved into syndication in 2002 and went on to have four other hosts.

After an amazing 17 years in that format, interest in the show finally dwindled and the show was averaging about 2.24 million viewers, which is in the middle of the pack for syndicated shows as a whole but well behind top game shows Jeopardy, Wheel of Fortune and Family Feud.

The show was cancelled as the cost of production outweighed the value of the show to the networks and producers were having a hard time selling the tired show.

Who Wants To Be A Millionaire (NY) Broadcast Time

In the New York area Millionaire is transmitted at 2:00 PM and repeated at 1:00 AM on ABC channel 7. In other TV markets the channel and the transmission time may vary.

Who Wants To Be A Millionaire TV show is syndicated to the domestic United States. The show is also broadcast in Puerto Rico and The Virgin Islands. The show is not sold to foreign markets as each country has their own version of the show.

Who Wants To Be A Millionaire (NY) Age Requirements

Everyone attending a WWTBAM must be at least 18 years or older to attend this TV show and must have proper government-issued ID.

Who Wants To Be A Millionaire (NY) Background

In the world of New York TV show tapings, Who Wants To Be a Millionaire is rare in that it allows potential viewers to also be potential contestants.

Offered at each taping or in advance of the show, auditions give members of the public the chance to prove that they should be part of the show. It's a great deal overall - get into a TV show taping for free, and maybe leave with a million dollars. Just don't forget to pay the taxes on your winnings.

In 2016 the show moved from NYC to Las Vegas at the Caesars Entertainment Studios.

Regis was picked as the host to bring the US version to network television back in 1999. The show used the same format used in the British version and their host Chris Tarrant. All the details of the US show were a direct copy of the British show, including art, music, bumpers, camera angles, show format and the prime time transmission slot.

The only real difference between the shows was the type of questions used and an increase in commercial breaks. Philbin took the show to record viewing numbers and ultimately saved ABC from being relegated to number four network channels in the US. Regis' popularity grew and when ABC decided to cash-in the brand by syndicating the show and making the show a daily occurrence on TV instead of keeping it the once-a-week format,

Philbin saw the writing on the wall and quit while he was ahead, as he had no interest in working the show every day.

Meredith Vieira ushered in the show from a weekly network TV production into a daily syndicated TV show and public interest and viewership was maintained for a while, but execs at ABC ultimately damaged a successful brand by over-exposing the show to TV viewers, who eventually turned off in droves.

The show made the questions harder and gave away less money to contestants. Meredith Vieira burned the candle at both ends by hosting this show at the same time she also co-hosted such NBC shows as Dateline NBC and Rock Center.

Millionaire changed things up a bit by bringing in popular TV and touring comedian Cedric "The Entertainer" Cedric as host of the hit series after his agent persuaded producers to put some humor back into the show, after all, Meredith Vieira was seen as being a little dry and lacked charm and witty dialog with show contestants.

When the show announced that it was moving to Stamford, Connecticut to reduce production costs and gain valuable tax credits, CTE expressed his displeasure and indicated that he wasn't interested in the commute to the new studio location, especially given that he had roots in Los Angeles and New York City was already a stretch for him.

CTE's one season party at Who Wants To Be A Millionaire ended despite his daytime viewing numbers being reasonable and favorable reviews.

With a less-than-illustrious start in the TV industry, Terry Crews is an actor and TV personality who had a former career as a football player for the LA Rams and retired with the Philadelphia Eagles. He is best known for starring in TV shows like "Everybody Hates Chris" and "Are We There Yet?" and appearances in movies like White Chicks and Bridesmaids.

Mr. Crews joined the Who Wants To Be Millionaire franchise after Cedric The Entertainer quit in 2014. He recorded one hundred and fifty shows in the 2014 season. Building on the critical success of Cedric The Entertainer on the show, Mr. Crews drew in a new demographic that enjoyed his humor and celebrity on this long-running game show. Initial reports on viewership and critical review were positive and but TV execs did not bring him back for the 2015 season, in favor of Chris Harrison to change the dynamic.

Chris Harrison was born in Dallas, Texas on July 26, 1971. The TV host is synonymous with ABC’s long running The Bachelor franchise, as he has hosted the show and each of its variations (The Bachelorette, The Bachelor Pad and Bachelor’s Paradise) since its debut in 2002. The Dallas native attended Oklahoma City University on a soccer scholarship, which segued into his television career where he began by covering local sports and later horse racing for the TVG network. Harrison had married his college girlfriend, with whom he has two children with.

In May 2012, Harrison and his wife announced their divorce after 18 years of marriage. Harris was quoted in an interview with US magazine, saying that the two still remained close friends. In addition to hosting The Bachelor and The Bachelorette, Harrison has also hosted Designers’ Challenge on HGTV, an American Music Awards pre-show on ABC and also covered the red carpet for the Primetime Emmy Awards. In April 2015, it was announced that Harrison would succeed Terry Crews, as host for the long standing game show, Who Wants To Be A Millionaire? for the 2015-2016 season.

Harrison took the show to very end, when the show was cancelled in 2019.

Who Wants To Be A Millionaire (NY) Notes

Noteworthy Events and Dates for this TV Show