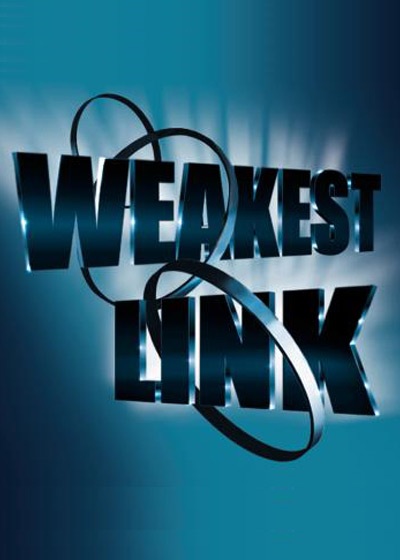 The Weakest Link: Eight strangers must form a team. There can only be one winner. You know the format. You know the catchphrase. Now, feel the fear..........Live.

The UK's Anne Robinson hosted this Hollywood game show exported from England. The show became a cult hit for Anne's bondage inspired clothing and famous one liner "You are the weakest link, goodbye!"

Unfortunately, The Weakest Link has been canceled and so you can no longer get tickets to this TV show.

This show was cancelled in the USA due to poor ratings in 2003 amid Robinson's inability to appeal to American audiences. The show in the UK continued until 2011, but was never shown in the USA.

Audience members must be 18 years old

The Weakest Link has had the prize money bumped up to a million dollars for the U.S. contestants - but the rest of the show's pretty much the same as the British original. There's still the walk of shame and there's still Anne Robinson.

The only other difference between the British and American Weakest Link shows is that in the U.S. the audience laughs whenever Anne delivers one of her barbs, something the TV executives want to stop because it dents Anne's credibility. She says "I don't see what there is to laugh about, I am serious when I tell a contestant that they suck". She adds, "The US reaction is a like a naughty schoolboy - who needs a good smack."

The US audience have taken to Anne Robinson scary style, but the network which is putting out the show had its first experience of feisty Anne when she demanded they removed an airbrushed photo of her from their website: "I was never hired for my age or my beauty. The one thing you can't say is that 'She got the job by sleeping with the producers!'" she said.

It pays to be rude, at least if your name is Anne Robinson. The Weakest Link presenter has notched up £2 million in the past year for abusing contestants on the hit show, according to the UK's Sunday Mirror magazine poll.

Anne Robinson's final parting shot to the ousted contestants on the game show The Weakest Link has gone down in television history. Surpassing other historic catchphrases uttered by the likes of James Bond ("The name's Bond, James Bond,") and Victor Meldrew ("I don't believe it!"), Anne Robinson has coined the next definitive one liner: "You are the weakest link ... goodbye!"