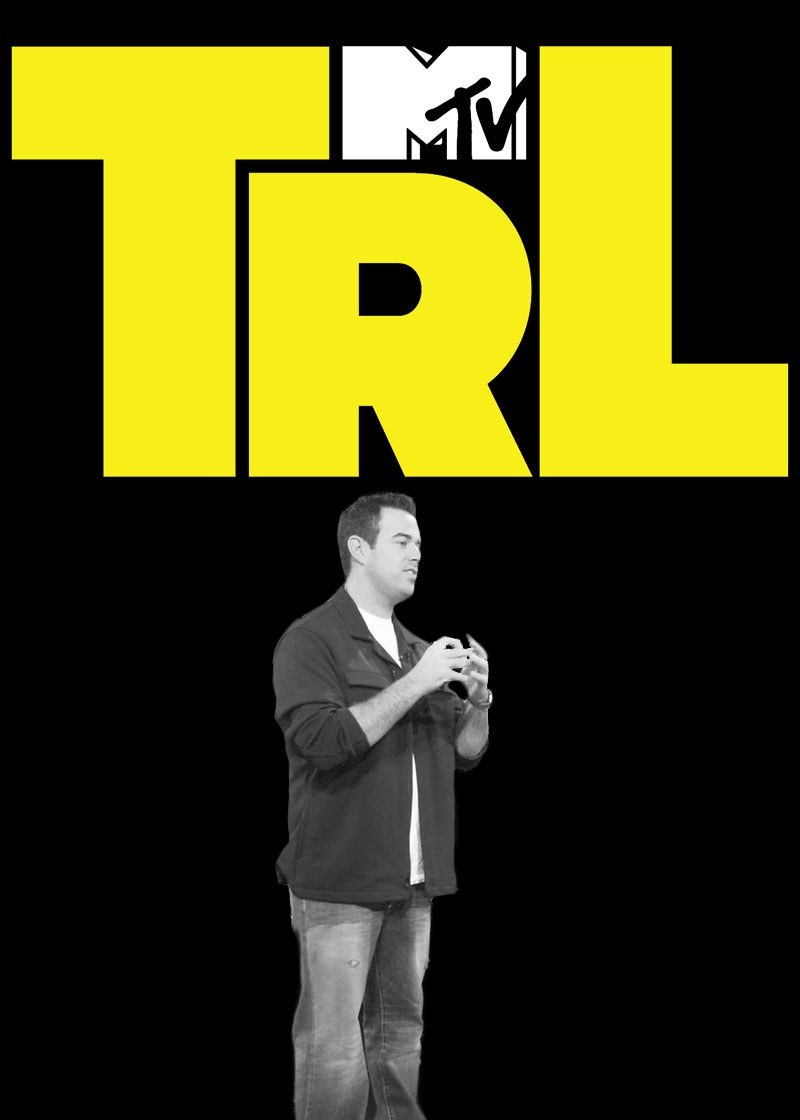 Total Request Live, or TRL, is an hour-long weekday afternoon show broadcast live from MTV's studios in the heart of Time Square. TRL brings the hottest music and biggest celebrities to the 12-18 television audience. Each day, TRL counts down the 10 most requested videos in the country, as chosen by fans who vote online.

The show's audience is booked two or three months ahead of taping.

The show taped at 2PM every weeknight, with its delayed airing broadcast live at 3:30PM

It is amazing that this MTV video countdown show was so massively popular, but between the departure of host Carson Daly and the increasing popularity of watching videos online, MTV and TRL could not attract enough of an audience to keep it on the air.

The show ran an astounding ten seasons from 1998 to 2008 and in its heyday, the show stopped traffic on Broadway, got Mariah Carey to have a meltdown on live TV, transmitted Carson Daly saying the eff-word under his breath and had the musical debuts of Britney Spears, Christina Aguilera, and Jessica Simpson.

This show went out of favor as fast as it came and the format worked so perfectly in those naïve times. Many TV shows have since tried to emulate the success of Total Request Live, but have failed miserably.

TRL is broadcast live, five times a week at 3:30pm on MTV.

All audience members must be at least 16 years of age, photo ID is required.

There is an audience skew towards 16 year old females because that group tends to make up the majority of requests and is the most energetic on camera - MTV has figured out that screaming girl fans make good TV.

Prospective audience members will be filmed in the "Paparazzi Can" and will be evaluated by an audience casting director. Roughly 20% of all audience applicants will be rejected usually for age appearance issues or "lack of enthusiasm" - so fans need to "pump it up" to be get one of the elusive TRL tickets .

TRL's celebrity guests range from actors such as Will Smith and Tom Cruise to musicians such as Eminem and Kelly Clarkson.

The Total Request Live studio at MTV is quite small so the audience gets to surround and interact with the guests which makes the TV show a unique and personal experience. As the limited tickets for this MTV show are so coveted, TRL attempts to engage its viewers at home by allowing them to call into speak with celebrity guests and win prizes on air.

Additionally, when the limited budget allows, TRL sends fans to various locations around the world to visit movie sets, cover concerts and premieres, and attend events such as spring break and the MTV Music Video Awards.

The TRL studio has an audience capacity of 80 persons. All audience members have to "Appear to be between the ages of 16 and 24" and have ID to prove that you are over 16.

With a handpicked teen audience (Who must appear to be between the ages of 16 and 24 and provide ID to show they are over 16) whoo-hooing on cue, host Carson Daly introduces the 20-year-old Willa Ford, who's dressed like some fashion designer's idea of a juvenile delinquent: worn jeans and a sleeveless white T-shirt, plus layers of makeup that give her skin a nasty mushroomy sheen. "Are you really all that bad?'' Daly asks. Ford giggles and announces, yes, she's bad. "Whoo hooo!'' roars the crowd.

Ford's video, "I Wanna Be Bad,'' is cued up, the latest of its several appearances on the show in recent weeks. Daly breaks for a commercial, Ford waves to the crowd on the street below, then she's off to a nearby record store, where her first album's just gone on sale. "Willa Was Here'' will debut at No. 56 on the Billboard album charts - strong results for a young woman known chiefly for once dating a member of the Backstreet Boys.

"MTV is what broke me,'' says Ford, glowing and a little out of breath in a dressing room after her cameo. "Once your video's been on 'TRL,' you're a totally different animal.

"Radio stations that didn't support me started playing my music. I came here and met them a few months ago and they really liked me as a person. They believed in me early on.'' MTV, the pop-culture juggernaut we love to hate and can't stop watching, turned 20 last week.

The channel that shortened our national attention span and vacuumed up a few million points from our collective IQ is exiting its acne-prone years, looking flusher than ever.

Ratings are high, revenue's up, and MTV's hold on the much-prized 12- to-24-year-old audience in what looks like a full nelson.

Dozens of musical acts have been born, gold-certified and buried since MTV arrived, beaming the Buggles' "Video Killed the Radio Star'' from a modest studio in Fort Lee, N.J., in 1981. It crawled into our living rooms and introduced us to Nirvana, Beck and R.E.M. Through MTV we made the acquaintance of a long list of acts now relegated to the clearance bins, like Kim Carnes, Twisted Sister, Frankie Goes to Hollywood, A-Ha and Right Said Fred.

In the self-devouring world of pop, MTV's the sole survivor. So why, these days, does it seem like the channel's lost its mind? Or at least, lost interest in music, especially quality music? The bulk of the channel's lineup is not videos but a pastiche of feather-light original programming, all aimed at the teen crotch. There are panting soap operas like "Undressed,'' cartoons like "Daria,'' an assortment of beach and bikini specials, and guilty-pleasure reality shows, like "Real World'' and "Jackass.'' The artists who do turn up tend to be teen-pop idols, like 'N Sync, or teen-pop idols in the making, like Ford, whose idea of "bad'' is a whole lot of rump-shaking and cleavage. You'll also find rap-rock acts and the occasional rapper giving a tour of his home on "Cribs.''

But that's about it. If you remember the first, guitar-heavy decade of MTV, in short, you probably haven't tuned in much for the second. Or you tune in merely to gawk at the sheer whoo-hooing silliness of it all. Which is precisely how MTV wants it. "It's this notion of evolve or die,'' says Van Toffler, president of MTV. "We made a decision early on not to grow old with our audience. And that might alienate some people who grew up with MTV, or who don't like what's currently happening in music. But we're always about staying true to a young demographic, the 18-to-24 core, and that will never change.'' That infuriates plenty of record labels, bands and critics, since MTV's notion of what kids want to hear rules out more than 99 percent of the roughly 30,000 albums released each year.

MTV is NOT in the Music Business

MTV isn't in the business of selling music; it sells time in a colorful funhouse to advertisers eager to reach the youngsters who roam America's malls. Premiums for that opportunity are high. MTV's profit margins are among the fattest in the cable industry. What's odd is that the channel's clout in the record industry hasn't waned.

For the few artists ushered past MTV's velvet rope, a fortune awaits, because they'll appear not just in three-minute videos, but in 30-minute segments, as hosts of spring-break specials, or an episode of "Diary,'' or a segment of "Becoming,'' a show in which some regular schlubs get makeovers as their favorite band and then record a video, lip-syncing in full look-alike costume. "Becoming,'' like a lot of MTV shows, is about as close to an infomercial as pop gets. It's almost impossible to have a big hit record without MTV exposure - and on those rare occasions when it happens, MTV's displeased. "At the end of the year, we look at ... the top 20 selling albums of the year,'' says Tom Calderone, the energetic 30ish executive in charge of programming. "Some years that list includes a Faith Hill or a Garth Brooks.

But damn it, I want to know that the majority of those albums were buzz-worthy or handpicked on MTV or performed on 'TRL.' We want to be part of the story.'' For artists who don't make the MTV grade, there's the channel's sister operation, MTV2, which shows nothing but videos and reaches less than half of MTV's 78 million homes. After that, options are limited.

The nearest competitor, Much Music U.S.A., barely registers nationally. Like it or revile it, MTV's still the closest thing to a national Top 40 radio station that we've got. "Of course it's frustrating, but you have to look at it from their shoes,'' says Andy Gershon, president of V2, an independent record label with acts such as the Black Crowes and Chocolate Genius. "Their edict isn't to break 20 bands this year. It's to get ratings and to charge this much in advertising. Our two edicts don't necessarily overlap.'