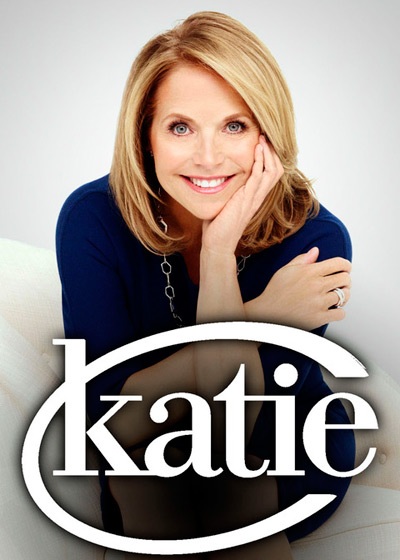 Katie Couric's new show, simply called Katie, gives her the opportunity to connect more directly with fans in a casual format. The show will touch on a wide array of subjects, including marriage, motherhood, beauty and style, cultural issues and trends, celebrities, and more.

Schedule can vary, but typically Katie tapes on various Monday through Friday at 9am or 12:30pm.

Katie was a “lifestyle” talk show, hosted by journalist and anchor Katie Couric on ABC. The platform featured typical current events akin to what Ms. Couric had done during her entire news career, while introducing elements reflecting her own interests. On June 6 2011 it was announced that Couric and ABC had mutually agreed to end the show after its two year run. It is not clear why they 'mutually agreed" to part ways. It could have been the fact that Couric was being underpaid at ABC, had less creative control than anticipated or it may have been because the second season ratings took a dive. The decision to go may have been made a little easier for Couric, as it has been reported that Yahoo offered her a $5 million dollar salary to headline their News team, which is where she went with little fanfare. The show had 195 episodes.

Katie is a syndicated TV Show that is transmitted on different TV stations at different times across the US, so check your local listings.

You have to be at least 16 years old to attend a taping of the Katie Couric TV show. Government-issued photo ID is required.

Low ratings indicated that maybe the country wasn't ready to see a female journalist holding the network news spot that has always been populated by men - or perhaps people just weren't ready to take Katie Couric seriously. As a result, rumors that Katie might be vacating the CBS News spot and starting her own show immediately became prevalent. But then in 2008, a notorious interview with Vice Presidential candidate Sarah Palin, in which Couric's questions had Palin lost for words, reinvigorated Katie Couric's reputation as a journalist.

The rumors started up again a couple years later and, in 2011, Couric finally announced that she was stepping down from the Evening News. She certainly won't be leaving television, though, and the next step is now hosting her own daytime TV talk show on ABC. It is a logical move for Katie Couric, as she works to establish herself as the modern-day Barbara Walters - a TV star who is adept at everything from hard news to light talk show chatter.

Since her days on The Today Show, Katie Couric has grown a following of fans who should be happy to see her back on daytime television. With her intelligence and cheerful demeanor, Katie Couric is a likable personality that attracts a wide audience, comprised mostly of women, from numerous age groups.