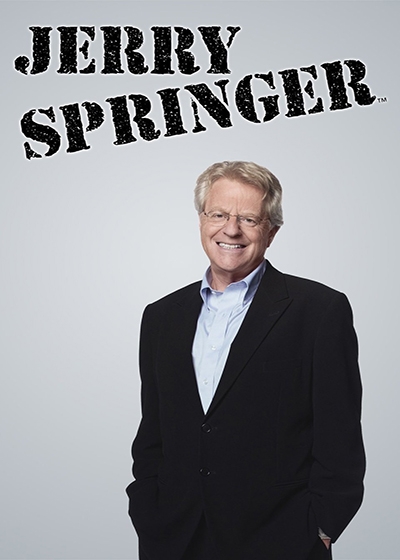 The Jerry Springer TV Show debuted on September 30, 1991 as a replacement for the Phil Donahue Show (the grand-daddy of the modern TV Talk show), which had recently been cut and the Springer show was seen as a way to fill the schedule void. The show is a daytime relationship problem resolution TV show often with violence.

The show tapes Mondays and Tuesdays, taping two shows on Mondays (times range from 10:45AM and 3:00PM), and one show on Tuesdays (usually one show in the morning at 10:00AM). Audience members must stay during the entire taping of show (usually 3 hours).

After an amazing 25 years of entertainment, Jerry got tired of taping the show and ended it on a high note. He is not done with TV though, he plans to come back with his new show Judge Jerry Springer, which is a great deal less taxing in terms of taping schedule and very lucrative

In the New York area, The Jerry Springer TV Show is transmitted on channel 11, Monday - Friday 11:00AM and 12:00PM. In other TV markets, the show may be shown on other channels and at other times. The Jerry Springer Show is syndicated across the domestic United States. The show is also re-broadcasted in Mexico, Canada, Puerto Rico and The Virgin Islands.

There is a minimum age of 18 years old to attend this show.

Being in the TV show audience for a taping of The Jerry Springer Show can be a great deal of fun to watch. People who go to watch this show being taped know that they will have a fun time listening to the families stories, seeing guests flip out at one another and listen to a great deal of yelling and very little listening. One of the great attractions of this show is seeing physical violence erupt live on stage, right in front of them, usually caused when one guest drops an eff-bomb or makes a slur against another. Both Springer and Steve Wilkos tend to use their guest's misfortunes as a way to generate TV ratings, but both take care not to go too far and insult or degrade their guests.The tapings are often described as slow-motion car crashes that go at full speed at the moment of impact.

The TV audience waits with baited breath for that moment of anarchy, and when it comes, it is welcomed into the world with all the glee of birthday party or a pretty view. The production has a lot of security guards, so the audience feels safe enough to yell at guests. In some cases the audience members arguments with guests becomes part of the show. Food and beverages are supplied to keep momentum going throughout the show.

The Jerry Springer Show audience is diverse in all races and ages from 18 years old up to 50 years old. The audience is drawn by the exaggerated drama that occurs on stage along with the security that must always be near. Everyone usually screams JERRY when a verbal or physical altercation breaks out causing the entire audience to be on their feet in seconds.

Jerry's show started as a political TV talk show in 1991, but ratings dropped quickly and the producers quickly morphed the show into a low-road production where they started getting better ratings when they covered low-brow content like who-is-the-baby-daddy and my-girlfiend-cheated-me-with-my-father. Surprisingly, on the early format shows, guests included Oliver North and Jesse Jackson. The show became more successful as it became more lowbrow, with an emphasis on infidelity, lewdness, and sex. Its guests were typically blue collar people and it seemed that there was an untapped market of family dysfunction, which the Springer Show leveraged to the hilt.

The show has a special love for trailer trash folk, especially when confronted on the Springer stage by family members or adversaries. The show format also works well when a spouse or family member has secrets to divulge concerning adultery, homosexuality, prostitution, transvestism, hate group membership or other controversial situations. These confrontations often lead to on-stage arguments, shouting, profanities, chair-throwing, fist-fights, violence and sometimes the removal of clothing.

The new Judge Jerry Springer seems like a direct copy of the Judge Judy show, but now with fights!

September 30,1991 - The Jerry Springer Show was first aired on television - started life as a political talk TV talk show
September 1992: The show is purchased by NBC Stations
December 1994: Topics on the show become provocative and low-road format
January 2001: Advertisers were forced to stop sponsorship of the show due to content and complaints by pressure and religious groups
October 27, 2010: 20th Anniversary show taped in Times Square in New York City
September 2014: production moved to Stamford Connecticut