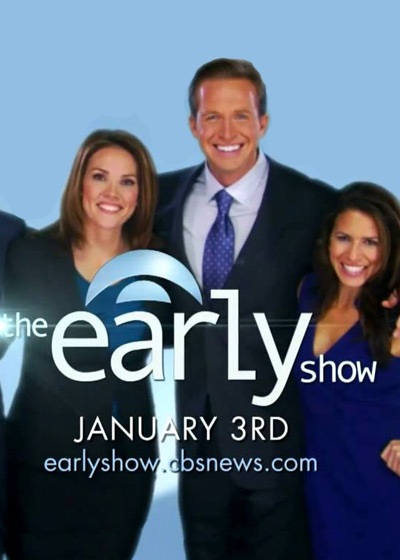 The Early Show is the CBS Network's lively morning news and entertainment program, which features news, weather, sports, and interviews with celebrities and experts.

The Early Show does not have a studio audience, so tickets are not distributed. But audiences are allowed to join the show outside on the plaza where it tapes special segments every morning Monday through Saturday. Our TV Ticket Guide will tell you about the experience of hanging out with The Early Show, the best time to arrive, and other tips.

The Early Show tapes live Monday through Saturday at 7AM.

This TV show tapes on the plaza of the GM Building, located right by Central Park at Fifth Avenue and 59th Street.

Following the demise of his Food Network show, Emeril Live, celebrity chef Emeril Lagasse experimented with a program that was a mix of late night talk show (complete with a house band) and cooking show, but it quickly disappeared from TV. Fortunately for the charisma-filled Lagasse, this show was not his last, as he went on to star in several food related shows.

The Early Show airs each weekday morning at 7AM to 9AM on CBS.

You must be at least 8 years of age to attend a taping of The Emeril Lagasse Show.

The Early Show is CBS' answer to The Today Show and Good Morning America. Like those morning programs, The Early Show provides viewers a lively mix of news, weather, sports, and special features on everything from health issues to entertainment. The weekday morning show on CBS has been through numerous incarnations over the years, with the current Early Show debuting in 1999. Bryant Gumbel and Julia Chen helmed the show in its early years, and when Gumbel left a few years later, Harry Smith, Hannah Storm, Rene Syler, and Dave Price joined the line-up. In 2011, further changes were made and now the weekday Early Show co-hosts are Erica Hill, Chris Wragge, Jeff Glor, and Marysol Castro. The program has a weekend counterpart, The Saturday Early Show, which airs on Saturday mornings.