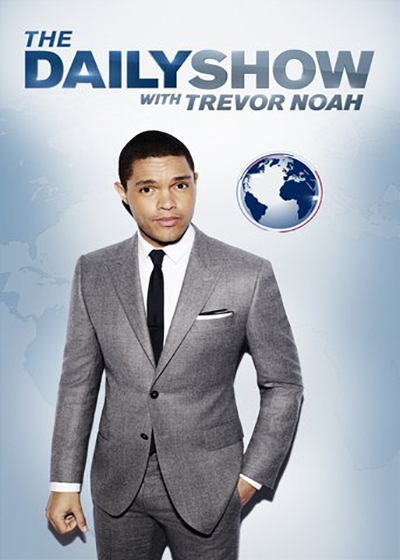 The Daily Show with Trevor Noah

Free TV Tickets For The Daily Show with Trevor Noah

The Daily Show with Trevor Noah is a satirical news program airing late nights on Comedy Central. Noah has hosted the show since Jon Stewart left in 2015.

Tickets for The Daily Show with Trevor Noah are being distributed through an external audience management website. Trevor Noah tickets are not hard to get, but the show taping is often long and not well attended, which is unlike the experience at The Daily Show when Jon Stewart hosted the show.

Trevor Noah also likes to promote his travelling comedy gig tickets, where he earns significantly more money than he does at the Daily Show, as he gets a piece of the action on every ticket sold. The tickets for his TV show are free and he is just paid a salary. which does not motivate him to get the audience begging for tickets.

The Daily Show with Trevor Noah tapes half hour shows from 6PM - 6:30PM (including time for commercial breaks), Monday to Thursday and airs the same nights as the tapings. If any lines are fluffed, they go back a re-shoot the scene, but the show rarely goes beyond one hour taping.

You must be at check-in at 2:30 PM to receive your tickets but should be there an hour before for guaranteed seating.

To attend a taping, you must be at least 18 years of age. The show producers are very strict about this so you also must have a government issued ID to present at check-in.

After years of being a successful comedian in his native South Africa, Trevor Noah moved to the United States in 2011. Shortly after, Noah appeared on the Tonight Show, and The Late Show with David Letterman.

Noah became the first South African comic to perform on either of these legendary programs. Noah’s U.S. appeal began to match is international acclaim, as his shows and television appearances were consistently met with high praise.

In 2014, Noah became a correspondent on The Daily Show. After Jon Stewart announced his retirement from The Daily Show, Comedy Central named Noah as Stewart’s replacement.

Before the taping starts at the Daily Show, the warm-up comic comes out and pokes fun at the audience with quick and funny insults that are not extremely offensive. Afterwards, Trevor Noah comes out for a quick 10 minute Q&A with audience so they learn more about him.

Audience members can experience first-hand Noah’s unique and rare comedic perspective, shaped by his upbringing, where his parents’ interracial relationship and his subsequent birth were illegal under South Africa’s apartheid law. His wit and relative youth (He is in his low-thirties) make Noah a fresh voice among the landscape of late-night TV show hosts, where the contemporaries are much older and predominantly white American, (Larry Wilmore aside of course).

Audience members witness the evolution of one of the up-and-coming young bright comedic stars in the Comedy Central galaxy.

Former Studio of The Late Show with Jon Stewart

The show is located in the same studio as the late, great Stewart’s version of the show, albeit with a $1 million dollar refit that switched around the seating position and improved the dated set.

Studio audiences get a great night of free entertainment with a new and different approach to the lighter side of political news and current events that made The Daily Show a beloved piece of American entertainment for the last 16 years.

The show was created by Madeleine Smithberg and Lizz Winstead. Until 2005, The Daily Show was filmed in NEP Studio 54, after which it moved to NEP Studio 52, where it has remained ever since. The original host of the show was Craig Kilborn, who at the time was the co-anchor of ESPN's SportsCenter; he served until December 17, 1998.

In Production Since 1996 - With a Variety of Hosts

The show has been on television since January 1996, which gives it the honor of being the second-longest running show on the network. Between the years 1999 to 2015, the show was hosted by Jon Stewart, who significantly increased the standing of the show due to his fanatical following. In 1999, when Jon Stewart replaced Kilborn, he altered the entire sentiment of the show.

The content came to adopt more of a political bent with a fake news vibe. Now that Noah has taken on the mantle, the show will likely continue its political focus. Noah strengths are his international focus, as he originally comes from South Africa and has been performing as a comedian around the world for several years.

Upon the announcement that Trevor Noah would be inheriting Jon Stewart's gig on The Daily Show, Noah came under fire from many angles including the New York press and Daily Show fans. It may have been that many were surprised by his selection to be heir apparent, when so many other viable candidates existed in the field, but there was a mad dash to see who exactly Trevor Noah was and it was during this process that many of his past questionable actions came to light. Noah faced a backlash after people dug up older tweets from 2011 and 2012, in which people called them anti-Semitic and sexist in nature.

Despite the backlash regarding Noah’s controversial tweets, Comedy Central stood by in support of Noah as Stewart’s successor. Trevor Noah has more critical acclaim abroad than his current status in the United States and the recognition it affords. Noah has already ingratiated himself to Comedy Central viewers as a correspondent on The Daily Show, but now audience members can experience his comedic talents as the actual front man for this new chapter in The Daily Show history, propelled by his fresh international comedic talents.

Show Improves on Ratings Despite Cable TV in Death Rattle

The show has opened up to more of an international audience and world leaders will now be seen more often on the show in place of domestic politics. Noah denied the claims and just attributed it to some comedic jokes that did not get a laugh, but that they still were funny. Comedy Central management did whatever damage control they could and the enlisted the help of Jerry Seinfeld, who included Noah on his show Comedians In Cars Getting Coffee, to show that he was in fact a friend of the Jews. Jon Stewart's real name is Jonathan Stuart Leibowitz and it would be crazy to think that he would entrust his legacy to an anti-Semite.

The Daily Show makes it especially hard for viewers to contact them. A DM on The Daily Show Twitter Feed does sometimes actually work, although they usually take a week or so to respond.

Other contact methods include old phone numbers (that no one seems to answer) and email addresses (that often go unread) demonstrate just how broken Comedy Central really is. Its owner Viacom is not much better and this is true for all its cable TV productions including MTV, BET. VH1 and TV Land.

For The Daily Show you can try the following contact details:

Noteworthy Dates for The Daily Show with Trevor Noah: