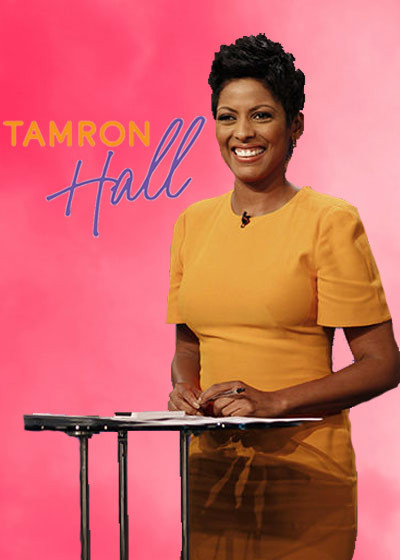 Tamron Hall is a daytime talk show that has the goal of inspiring others through deep, yet fun conversations about current events and celebrity interviews.

You can reserve tickets to Tamron Hall online in advance of the show.

Tamron Hall’s career in television started in the early nineties as a news anchor at various local news networks in Fort Worth, Texas and Chicago, Illinois.

In 2007, Hall joined MSNBC and quickly gained notoriety as a substitute anchor for the show Countdown with Keith Olbermann. She slowly began to rise through the NBC news ranks, first becoming co-host of The Big Picture, then gaining her own program, NewsNation with Tamron Hall.

Following Hall's departure from NBC, she used her time to step back, start a family and reflect on aspects of life outside of her career. However, after more than two years away from the camera lens, Hall finally returned to television, eager to share what life has taught her with her own show.

Tamron Hall shows viewers the lighter side of veteran news anchor Tamron Hall, which fans got a glimpse at during her run as co-host of the third hour of the Today Show, before Megyn Kelly took her spot on NBC.

Hall's self-titled daytime talk show highlights her ability to inspire and relate to others as she discusses everything from topical human-interest stories to the lives of her celebrity guests. The show serves as a daily destination for viewers to connect with the people who play a part in shaping the world through meaningful and fun conversations. Some critics complain that her show is so light that it lacks credibility.