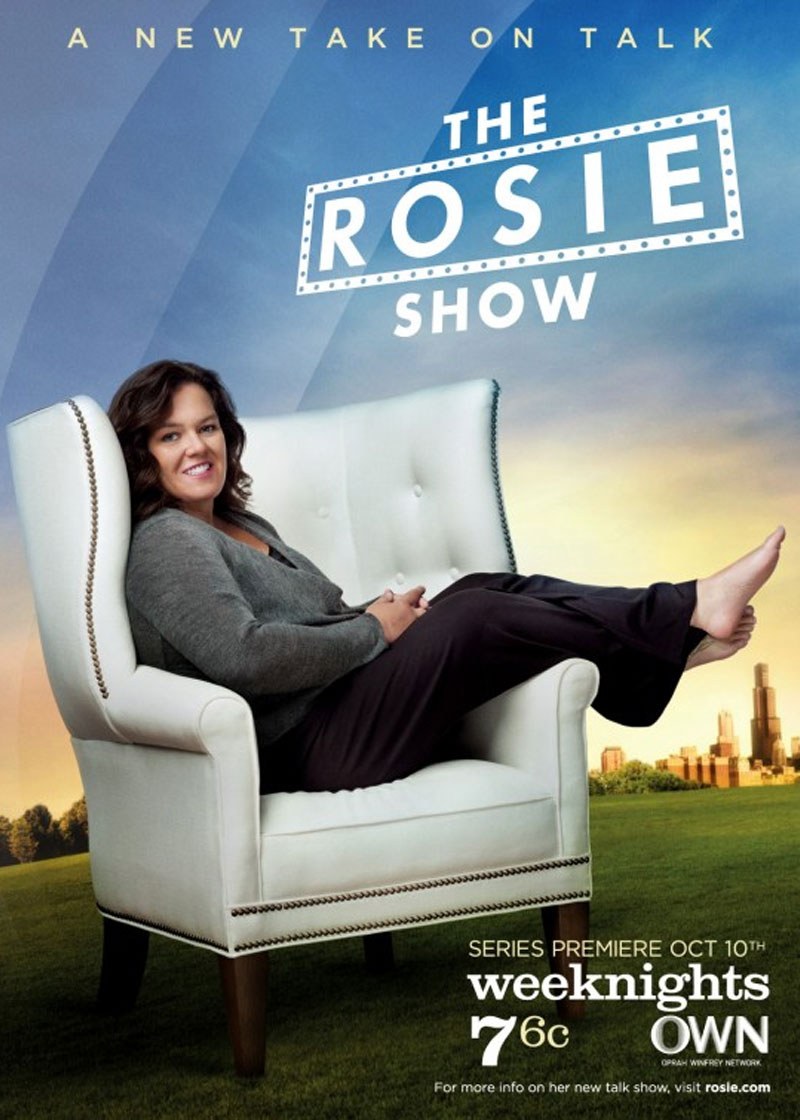 Rosie O' Donnell had actually been pursuing the old timeslot of The Oprah Winfrey Show on Broadcast TV, but failing that, went the next best route and joined the Oprah empire.

Controversial Exit from The View

Rosie, who has not been seen on television since her controversial one-season stint on The View in 2007 that ended following an explosive on-air confrontation with then-co-host Elisabeth Hasselbeck.

O'Donnell announced her intention to return to the medium again in 2011 with her own TV show, which was a one-hour show in which Rosie focuses on one theme during the program. Long time confidants Scott Carlin and Dick Robertson are serving as the Rosie TV show's producers.

The Rosie TV show will begin accepting advance ticket requests in 2011. At that time, we will post the information for requesting advance Rosie tickets in our TV Show Tickets guide.

Rosie O'Donnell returned to TV, this time doing her own show at Oprah Winfrey's old studio in Chicago. Low viewership ratings caused the show to end after just one lousy season, with O'Donnell pursuing other "projects", most of which involved dissing her former co-hosts on The View and attacking her nemesis Donald Trump. Rosie is best suited to Broadcast TV, where she can reach a wider audience.

This show is syndicated and is usually aired at 11AM

Long Island, New York native Rosie, known as "Ro" to her biggest fans, started as a stand-up comedian and later went into acting (her feature films include A League of Their Own and Sleepless in Seattle).

From 1996 to 2002, Rosie established herself as a household name with her popular morning talk show, The Rosie O'Donnell Show. On the multiple Emmy Award-winning Rosie O'Donnell Show, she told funny anecdotes, interviewed celebrity guests, featured the casts of Broadway musicals, often talked about her love for Tom Cruise, and engaged in playful interactions with the audience (including her signature bit of launching koosh balls at them).

Rosie tickets for the finale of the old Rosie Broadcast TV show in 2002 were sold for over $400, even though Rosie was just coming out of the closet and her fan base was coming to terms with her real persona.

Since then, Rosie O'Donnell has been a lightning rod for controversy, coming out of the closet as a lesbian, speaking out on political and social issues, adopting children, getting in public disputes with Donald Trump and her co-stars on The View, and more. The post-Rosie O'Donnell Show activity tarnished Rosie's label as "The Queen of Nice," which will make it harder for her to assume the mantle of Oprah Winfrey.

There is no denying, though, that Rosie O'Donnell still has a strong fan base, and people who loved The Rosie O'Donnell Show may be persuaded to return to Rosie's flock again when she comes back to TV in 2011.

The new Rosie O'Donnell show was taped in Chicago five days a week.

Rosie had indicated that she might consider taping in a Broadway theater in New York City (which would be appropriate given her well-known love of Broadway and her frequent past support - and participation in - Broadway shows). But in March 2011, it was announced that she would be taking over The Oprah Winfrey Show's Harpo Studios in Chicago after Oprah's show concluded.

The move allows the now-iconic Harpo Studios and much of its staff to continue thriving. With Oprah Winfrey retiring her massively popular daytime TV show in 2011, it seems that Rosie is gunning to make her show a kind of successor to Oprah's. "I want to build on what Oprah began and excelled at for 25 years, in my own style and with new adaptations and ideas," said Rosie O'Donnell in a statement. "I would like this show to make a difference in viewer's lives, to be real, uplifting, authentic and focus on life, love and laughter."

Rosie has already demonstrated an interest in establishing herself in the Oprah mode by getting involved in various media, creating Rosie magazine, hosting a radio show, becoming an avid blogger, founding a cruise line, writing books, producing the Broadway show Taboo, co-starring in the Broadway revival of Fiddler on the Roof, and getting involved with kids charities.

Rosie's many run-ins with Donald Trump has failed to develop her following.

Shortly after the dismally unentertaining musical Seussical opened on Broadway in November 2000, the ubiquitous talk show host and would-be actress Rosie O'Donnell announced that she would be temporarily taking over the lead role in the play. The $10.5 million show, a haphazard pastiche of various famous Dr. Seuss stories, had been savaged by critics when it debuted in late November.

At the time, the consensus seemed to be that the story was somewhat pointless, the score undistinguished, and the acting not quite up to par. Much of the criticism was directed at the star, the gifted but completely miscast David Shiner, a professional clown and alumnus of the renowned Cirque du Soleil. Though a gamer, Shiner was saddled with a complete inability to act, sing, or dance. That combination would sink any Broadway production.

Rosie O'Donnell Steps in to Save the Show

For obvious reasons, O'Donnell's decision to step into the breach was greeted with glee by the play's embattled producers. Seussical ticket sales immediately exploded; the New York Times reported that O'Donnell's presence in the role of the Cat in the Hat could triple the show's daily take. Meanwhile, Shiner took a much-needed vacation in Europe.

It is a measure of O'Donnell's impact as a cultural monolith that her intervention in a crisis such as this should reap immediate financial rewards for the various participants. For years, O'Donnell has been a champion of shallow, critically maligned, middlebrow entertainment, and what she lacks in sophistication and taste she more than makes up for with pluck. What she's demonstrated is that she can not only move a market, but almost single-handedly sell the public a product it did not previously want.