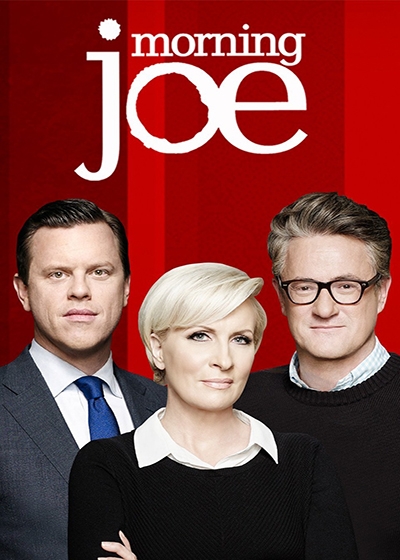 Morning Joe is a daily morning news and talk show that features both enterprise reporting and in-depth discussions on hot news topics and current events.

You can get FREE tickets to Morning Joe on the dedicated ticketing website and fill out a short form containing your name, number of tickets and your desired date.

This show tapes Monday through Friday live at Rockefeller Center at 6AM.

Morning Joe is transmitted between 6AM and 9AM on the MSNBC cable channel.

You must be 16 years or older to attend a taping of this TV show.

Joe Scarborough was first elected as a Republican congressman in Florida’s 1st congressional district in 1994, and he was subsequently re-elected in 1996, 1998, and 2000.

In the latter two of these elections, he won 100% of the vote, running unopposed with the exception of write-in candidates. However, five months into his fourth term, he announced his intent to resign in order to spend more time with his family.

Scarborough has stated that when he dies, he would rather be remembered as a good father than a good congressman. Following his career in congress, Scarborough began to work as an environmental lawyer at Levin Papantonio Law Firm.

Despite several attempts by politicians to get him to run for the Senate, Scarborough instead found his new career direction in the media industry. It became the ultimate ego trip for him and where he would meet his current wife.

Scarborough's first media endeavor was a primetime news show called Scarborough Country, and then when Imus in the Morning sought a replacement, Scarborough was chosen for the permanent slot with Morning Joe, which has been on the air since 2007. Featuring interviews with top politicians and newsmakers, as well as analysis of the most important news stories, Morning Joe has risen to be a prominent force in its morning timeslot.

Joe Scarborough has hosted Morning Joe since 2007 on MSNBC, as well as his own late morning radio show on WABC since 2008. Prior to his career as a cable news and talk radio host, Scarborough served as a Member of the U.S. House of Representatives, specifically as a Republican in the state of Florida, from 1995 to 2001. In 2017, he left the Republican party to become an independent.

Joe Scarborough is renowned for his unwavering commitment to integrity in journalism. Since the beginning of Morning Joe, Scarborough has been flanked by his co-host, Mika Brzezinski, a seasoned journalist who was the principal on-the-ground reporter at Ground Zero following the 9/11 attacks. Brzezinski is also an accomplished author with three books and counting. Scarborough and Brzezinski married in November 2018.

The second co-host on the show is Willie Geist, the television personality, journalist, and comedian. In addition to his work on Morning Joe, Geist is the anchor of Sunday Today with Willie Geist, also on NBC. Beyond their regular program, Morning Joe is a regular presence at major political conventions, inaugurations, and other moments of great national importance.

Since the beginning of the show, it has helped drive the political conversation in America, and the in-depth features along with exciting array of guests make this morning show one to tune into on a regular basis. As recognition for the show’s excellence, it has been nominated for several awards including the 2013 News & Documentary Emmy Award for Outstanding News Discussion & Analysis, as well as the 2015 GLAAD Media Award for Outstanding TV Journalism.

Morning Joe attracts a wide variety of guests, including cultural influencers, political insiders, and cutting-edge journalists. The show represents a diverse array of voices, covering up-to-date news stories with keen analysis and insights. Along with his two co-hosts, Scarborough leads the show in a panel format to help drive the nation’s political conversation. Scarborough brings years of experience and insight to the post of hosting Morning Joe.