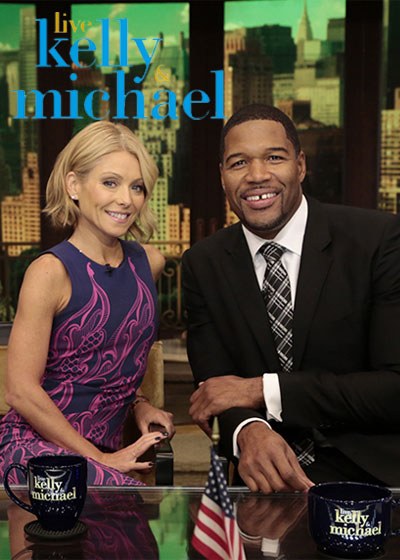 Live! with Kelly and Michael

Free TV Tickets For Live! with Kelly and Michael

Live! with Kelly and Michael Summary

In January 2011, Regis Philbin announced that it would be his last year co-hosting Live with Regis & Kelly. His departure near the end of the year was met with many reminiscences and tears, but the show must go on, so Kelly Ripa continued hosting the beloved morning show as Live with Kelly and Michael. Kelly was joined by a wide range of co-hosts, such as Jerry Seinfeld and Neil Patrick Harris. On the September 4, 2012 episode of Live with Regis and Kelly, long after Regis Philbin had departed and a gaggle of other temporary hosts had been sitting in the spare chair, it was announced that the next co-host of Live With Regis and Kelly would be Michael Strahan. Strahan had already co-hosted 16 times, so it seemed only natural - but he was not the viewers favorite, Seth Meyers had co-hosted a few times and received more rave reviews, but it was only later that it became apparent that Meyers was being groomed for his own late-night show.

Both in-advance and standby tickets are available for taping of the transmitted show of Live with Kelly and Michael and Michael at 7:00 AM daily.

Michael Strahan was introduced as Kelly Ripa's permanent co-host in 2012. The show kept up good ratings as the No.2 syndicated talk show. Despite the name Live!, many segments were not live, and instead pre-filmed weeks earlier and shown to a live studio audience to capture their reactions. Many celebrities graced the show over the years, including Will Ferrell, Billy Crystal, and Cher. On April 18, 2016, Strahan announced he was leaving Live! to join Good Morning America. The departure was reportedly a surprise, as Kelly Ripa only found out about the move the day it was announced.

You must be at least 18 years of age to attend a taping. Children under 10 aren't permitted to the taping.

Live! with Kelly and Michael Background

Live! With Kelly and Michael was fun to see live in the studio, especially as the hosts seemed to have an excellent on-screen relationship. After Strahan announced he was leaving the show for GMA, after only being on Live for four years, things got bitter on the set. Stories came out on Page Six of Ripa being difficult to work with and Strahan acting like a diva, which ruined the on-air chemistry of the last few shows that they shot together. It was like being at a Thanksgiving dinner with your divorcing parents, not much fun. The show producers tried to record as much they could before the audience arrived, so they could introduce those pre-taped segments seamlessly, without the viewers at home noticing and without any live, on-air spats. Before the split, audience members got to see a great show, albeit a lot of it pre-taped. After the split announcement, most of the segments were pre-taped. This would not normally matter, but the show is called Live after all and the irony was is that most of the segments were not live at all, something that ABC showed little concern about. The final shows were strained and a lot of fake emotion was given by both hosts, who reportedly have not spoken since the nasty split.

For twelve years, the popular daytime TV show Live with Regis & Kelly began as Live with Regis and Kathie Lee. But in 2000, Kathie Lee Gifford relinquished her spot as co-host of the hit morning show, leaving veteran TV personality Regis Philbin to fly solo briefly until new co-host Kelly Ripa (a well-liked soap opera actress) was found. From 2001 to 2011, the power duo brought a little extra fun to morning TV programming with Live. Their banter, the daily contests, interviews with celebrity and experts, musical performances, and a wide variety of segments that feature everything from cooking to pets made Live with Regis & Kelly a lively and enjoyable morning TV show, and the fun continues in its latest incarnation, Live with Kelly and Michael.