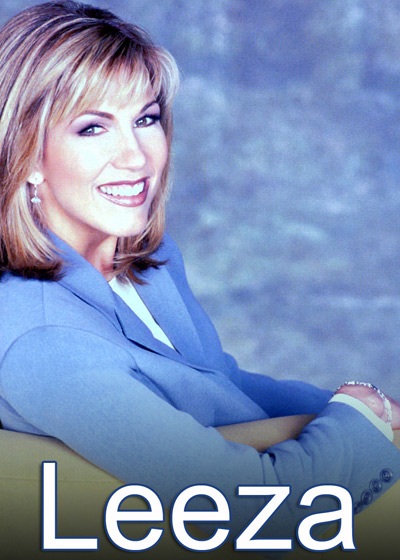 LEEZA was nominated for six Daytime Emmy Awards and co-executive produced and hosted by Leeza Gibbons.

The TV show provided viewers with a daily discussion of topics featuring some of today's biggest stars and news makers. The show went on to strengthen its commitment to topical programming by featuring compelling stories straight from today's headlines.

The set was redesigned in 1999 and featured a state-of-the-art, multi-dimensional, multi-use video wall which will allow more flexibility for Gibbons - from introducing exterior segments to showcasing video footage.

Free tickets to the Leez Gibbons show are available

The show tapes at 2PM each weekday

An experienced hand at reporting Hollywood gossip on Entertainment Tonight, Leeza Gibbons branched out with her own show, Leeza, where she covered a broad range of topics for seven years until it ended in 2000.

In 1993, the show was originally named John & Leeza from Hollywood, before the brief co-host John Tesh left and left Gibbons adrift. Tesh will not comment on his reasons for his departure.

The show is broadcast at 2PM each weekday

Debuting this season is "Friday Buzz," a weekly forum featuring a panel of celebrities, journalists, authors and other experts. Each Friday, Gibbons leads the group in a lively, unrehearsed, in-depth discussion which will delve into the topics of the day.

A new addition to LEEZA was a specially-designed audience section. This area will be used by Gibbons to focus on breaking news, current events, trends, and for allowing audience members to speak out about issues making news.

"I am very excited about our sixth season," says Gibbons. "With a new executive producer who is extremely experienced in day-to-day topical programming, we enter this season with a heightened energy level which will allow us to be more ambitious in tackling original subjects. We are intent on providing programming that will be unique, exciting and timely."

"I am delighted to helm a show which has a history of commitment to presenting intelligent, relevant programming," says Pretlow. "We intend to continue this tradition by focusing on more topics which have a sense of immediacy and importance. I look forward to working with Leeza and a talented staff that can bring this show to the next level of excellence."