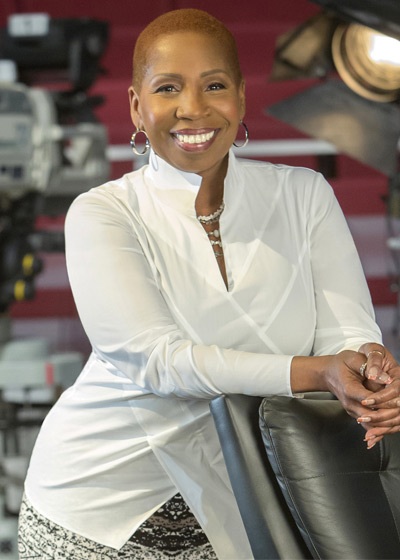 Hosted by best-selling author Iyanla Vanzant, this show provided you with the tools you need to deal with many of life's challenges, from bad relationships to bad-hair days, financial woes to food issues, and parenting dilemmas to dream fulfillment. IYANLA premiered August. 13 2001. Iyanla Vanzant, was produced by Barbara Walters and Bill Geddie's Barwall Prods. The strip has been cleared in more than 90% of the country, including WABC in New York, KNBC in Los Angeles, WBBM in Chicago and WPVI in Philadelphia.

Seats are distributed on a first come - first served basis (You must already have tickets).

The Iyanla Vanzant show tapes every Tuesday, Wednesday and Thursday at 1:30PM and 4:30PM.

Billed as the East Coast Oprah Winfrey and produced by Barbara Walters, this ordained Yoruba priestess and self-help guru's show made it only one season before execs pulled the plug on the life support.

In the US the show is usually broadcast during the month following taping.

Her most recent work, Until Today, already is on the New York Times Best-seller list. She also is a nationally recognized speaker who has sold out such prestigious venues as New York’s Jacob Javits Convention Center, Nashville’s Grand Ole Opry, Atlanta’s Civic Center and the Wiltern Theater in Los Angeles. Vanzant became a household name to the daytime TV audience as a regular contributor on “The Oprah Winfrey Show.” Acclaimed journalist and producer Barbara Walters recognized Vanzant’s extraordinary appeal, seeing in her a “breakaway talent” with the potential for huge success in daytime television. With Walters and partner Bill Geddie on board to executive produce, Buena Vista Productions to develop the show, and Buena Vista Television as distributor, the road to IYANLA was forged. Vanzant has received numerous accolades for her work. In 1992, Los Angeles mayor Tom Bradley named October 21st “Tapping the Power Within Day” in honor of a workshop she presented in that city for African-American women. In 1994, she was named Alumni of the Year by the National Association of Equal Opportunity in Education, an organization comprised of the presidents and administrators of the 117 predominantly Black colleges in the United States. She also was awarded an “Oni” by the International Congress of Black Women as one of the nation’s unsung heroes, and she served as the national spokesperson for Literacy Volunteers of America in 1998. In 1999, she was listed among the 100 Most Influential African-Americans by Ebony magazine. Later that year, she was awarded the 31st NAACP Image Award for “Outstanding Literary Work, Non-Fiction” for Yesterday I Cried. She also earned her first Honorary Doctorate degree, Doctor of Humane Letters, from the City University of New York, Medgar Evars College. In 2000, she earned her second honorary degree, Doctor of Divinity, from the Theological Seminary in Atlanta, Georgia. In addition, Ebony has named her one of their “55 Most Intriguing People,” Vibe magazine tabbed her one of “100 Leaders of the New Millennium” and Newsweek recently included her as one of the “Women of the New Century.” The mother of three and grandmother of four, Vanzant lives in Silver Spring, Maryland, with her husband Adeyemi and Mr. Coco, their cat.

Vanzant's good will was infectious. Her ability to mock herself makes it easier for the rest of us to admit our own foibles. Back to Basics opens with a wonderful homily about why women have to try harder than men. The author jokes that when men try to get into heaven, they are only asked one question while women are required to answer four. God is truly in the details of her stories. Faith, she argues, is humanity's purpose on earth, and the only way to live a fully realized life is to get back to basics. She acknowledges that even people with faith get knocked down, yet Vanzant (The Value in the Valley) hopes to give her listeners the tools to get back up again. She is an empowerment specialist, spiritual life counselor, and minister.

The ax fell for Iyanla Vanzant on Monday Aug 12 2002 when on one of this season's most talked-about talk shows, "Iyanla," was canned. The show had the production expertise of Barbara Walters and her executive producer partner Bill Geddie behind it. Despite what one senior media commentator described as a "valiant attempt," the show, hosted by self-help expert Iyanla Vanzant, never managed to garner viable ratings. The show averaged a 1.1 rating since its Aug. 13 debut, In adults 18-49, the talk show averaged only a 0.5 rating according to Nielsen Media Research.Buena Vista canceled Iyanla after only six months.

Best-selling author, lawyer, nationally recognized speaker … Iyanla Vanzant’s accomplishments already impress, and with the Fall 2001 debut of her new nationally syndicated series IYANLA, her accomplishments will continue to grow. Growth is a recurring theme for Iyanla (pronounced Ee-Yon-La) Vanzant. Personal and professional growth, as she has progressed through years of personal struggle to achieve staggering success; an ever-growing fan base, mesmerized by her intoxicating personality and insightful ability to reach out to her listeners; and her ability to motivate and inspire others to grow themselves. Her path to success took her through a multitude of life-changing experiences that shaped the profound insights she eagerly shares with others. From a difficult childhood, shuttled from one family member to another, to single parenthood at 16 and mother of three by the age of 21, Vanzant took control of her life when she walked out of her second abusive marriage and entered Medgar Evers College in New York. After putting herself through college, and then law school, she spent two years as an attorney in the Philadelphia public defender’s office. Shortly thereafter, Vanzant combined her professional skills with her life’s lessons and embarked on a writing and speaking career. Vanzant’s mass appeal is evident in her overwhelming success as an author. Three of her 11 books -- In the Meantime, One Day My Soul Just Opened Up, and Yesterday I Cried -- are national best-sellers, ranking for weeks on the New York Times, USA Today and Wall Street Journal best-seller lists.