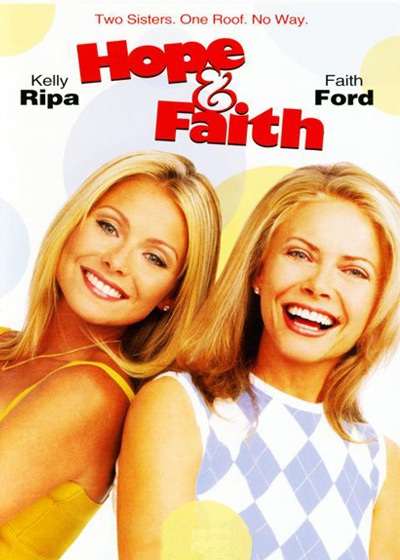 Kelly Ripa stars in Hope and Faith as a washed-up soap star who moves in with her sister Faith Ford and her family.

Stay-at-home mom Hope (Faith Ford, “Murphy Brown”) leads a busy, family-centered suburban life in the Midwest with her husband, Charley (Ted McGinley, “Married… with Children”), and three lively children. Her celebrity sister, Faith (Kelly Ripa, “Live with Regis & Kelly,” “All My Children”), has been living the high life in Hollywood as a daytime soap opera diva until her soap’s character, Ashley Storm, is suddenly and unceremoniously killed off on “The Sacred and the Sinful” by her evil twin.

This is fiction right?

Faith, who has never saved a dime, flees Tinseltown and the relentlessly inquiring minds of the tabloid press and seeks refuge in the suburbs with her sister. As Hope soon learns, you can kill the diva off on the daytime drama, but you can’t take the drama out of the diva. Hope, a down-to-earth, happily married mom of three, quickly finds her tidy world up-ended by her celebrity sister’s arrival. She already had her hands full at home dealing with a busy household that includes two daughters – a precocious pre-teen and a rebellious teen – and a quirky son.

But Hope begins to lose some of the control she holds so dear upon the arrival of Faith, whose outrageous antics have a way of engulfing the people around her.

Can Faith adjust to life far away from the spotlight without turning Hope’s world upside down? Can Hope share a roof with her larger-than-life sister and still hold on to normalcy and order?

Booking must be done three weeks in advance.

Hope and Faith tapes on Friday at 6:00pm.

Real hope and faith wasn't enough to keep this "Kelly Ripa" slow-motion car crash alive. The sitcom did manage to eek out three seasons, but was ultimately canceled. Kelly continued with her Live with Regis Philbin early morning yakker, where she dumped Regis and brought in Michael Strahan, much to the chagrin of her husband. The rest is history.

The show is transmitted weekly on ABC Television Network.

You have to be at least 16 years old to attend this TV Show.

Long Island City, New York 11101
Directions: Take the MTA 7 train to Hunters Point Avenue. Then, it is about a 20 minutes walk towards 34-02 Starr Avenue.
Studio Information