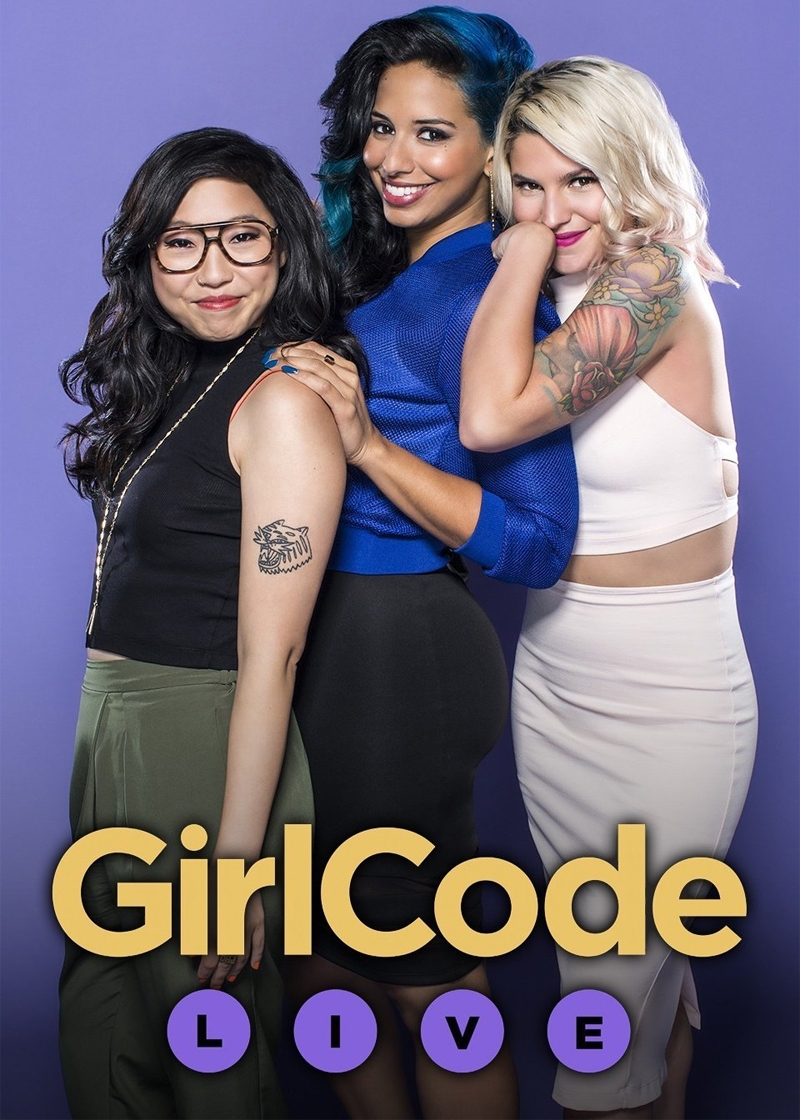 The original Girl Code TV show was 'a strong and smart women-driven' television show on MTV that made it to a fourth season before getting cancelled in 2012.

The entire show theme itself is a spin-off of its male counterpart, Guy Code, a show on MTV2 that has been running since November 2011, and whose cast includes Akaash Singh, Fahim Anwar, Sami El Kassmi, Timothy DeLaGhetto, and The Kid Mero.

Girl Code Live is a reality comedy series that features female actresses, entertainers, stand-up comics, and musicians who discuss the sisterhood that exists between women. There are occasionally male guests as well, but this show is really a bunch of man-haters.

The first season of this live version of Girl Code premiered in August 2015 and the hosts are presently Awkwafina, Nessa and Carly Aquilino.

You can get FREE tickets to this TV show by going on an external audience ticketing website called Onset Productions. You must make an online profile (including a photo of yourself) to request tickets.

Girl Code LIVE was a spinoff of its male counterpart, Guy Code, and it is not live counterpart, Girl Code. The reality comedy featured female actresses and entertainers Awkwafina, Nessa, and Cary Aquilino, all dishing the truth about womanhood. The show's last episode was aired on November 2nd, 2015 after just ten episodes.

The Girl Code Live TV show is a spin-off from the original Girl Code and airs live on Mondays at 10:00pm on MTV.

Nessa Diab is a radio and television personality, who in addition to hosting Girl Code Live has also hosted Hot 97, Teen Mom, The Real World, and Snooki & Jwoww. She was a VJ for The Week in Jams with Guy Code frequent guest, Charlamagne The God. She was discovered through YouTube, where she gave artist and celebrity interviews in addition to KYLD. Nessa is active with philanthropy, including the Hip-Hop-Has-Heart Foundation, and she spoke to the United Nations during Women’s History Month.

Awkwafina is a rapper from Forest Hills, Queens who is well known for satire and comedy in her music. She is the daughter of a first-generation Chinese American father and a South Korean immigrant mother. Her birth name was Nora Lum. She began rapping at the age of 17, and then went to the Beijing Language and Culture University to study Mandarin, followed by SUNY Albany to study journalism. Her solo album, Yellow Ranger, was released in February 2014.

Carly Aquilino is a stand-up comedian and television personality from Brooklyn, New York. She is best known for Girl Code, but she has also appeared on Gotham Comedy Live, Wolf Watch (Teen Wolf after-show), and Guy Court, which is a spin-off of Guy Code. She is well known on social media, having amassed over 500,000 Twitter followers by early 2015. She also appeared on the 2015 MTV Video Music Awards.

Girl Code LIVE! is both a hilarious comedy and an irreverent reality series. Great tidbits from the show include a how-to manual of extravagant tips to open dialogue and raise important questions about womanhood, both its wonderful aspects and its unfortunate ones.

Though this show is just getting off the ground, the first episode dealt with vomiting, taking pictures, and finding your one true love. Girl Code has incorporated topics ranging from health to race to divorce as well as sexuality, money, humor, vacation, self expression and bad girls.

Live Nature of the Show Gets Cast Fired Up

As this show is live for the first time, this is a very exciting time to catch these hilarious hosts talking about this wonderful range of topics relevant to women. In addition to Awkwafina, Nessa, and Carly Aquilino, there are always an excellent range of celebrity guests (often women) to make each episode fun and fresh.

Girl Code Live runs for 30 minutes and is slated to include a season of 10 episodes. This show differs from the original, called just Girl Code, because it is shot in front of a live studio audience. The executive producer is Ryan Ling, who is the creator of both Guy Code and Girl Code, and the MTV executives in charge of the show are Paul Ricci, the Senior Vice President and Head of Development and Production for MTV2 and mtvU, and Karen Frank, the Vice President of Series Development for MTV2, MTV Productions, and MTV Networks. All in all, this is a very experienced team behind this very exciting show that runs into some dangerous subject matter areas that MTV may come under fire for.

On top of that, the hosts are known for addressing any topic under the sun. Some great examples are when Carly said, “The older I get, the dumber I get,” and Nessa being frank about needing people to cover their mouths when they cough. The topics also get much raunchier, but the candor and hilarity never disappoints.