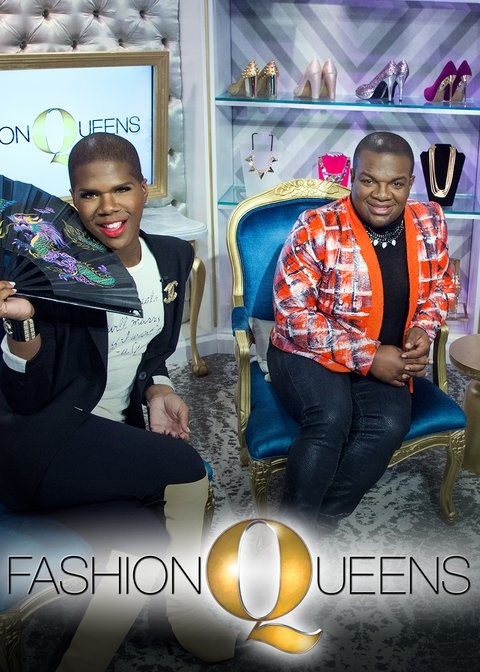 Fashion Queens is a late night TV talk show centered around the world of fashion and pop culture. The show is hosted by Bevy Smith (pop culture savant and social media personality), Derek J and Lawrence Washington (celebrity hairstylists, who have their ear to the ground in the entertainment and fashion industry). Smith acts as the ringleader setting up the topics for conversation that allow Derek J and Lawrence Washington to unload. The outspoken fashionistas pull no punches as they discuss a wide array of topics pertaining to celebrity gossip and fashion.

Details of how to get free tickets to Fashion Queens is available on our TV show ticket guide. The show is managed by Onset Productions, who are based out of California Keep in mind that just "applying" for tickets does not guarantee you your tickets because you must be approved first. After your pending request has been processed, you will get an email with the date of the taping you chose.

You will need to upload a photo of yourself to be approved.

Fashion Queens typically tapes on Fridays, but the show also tapes on Thursday afternoons as well, every two weeks.

Tapings start filming at 4:15 PM, although you are expected to be at the studio two hours prior.

Reading celebrities for poor fashion choices and exalting them for good ones is at the heart of this Bravo show. According to a host, the show was only meant to last three episodes, but went on for far longer than initially anticipated. One of the hosts, Bevy Smith, confirmed on Twitter on August 8, 2015 that show had been cancelled after three seasons.

Fashion Queens features a dynamic and opinionated trio of pop-culture/fashion savants. The hosts: Lawrence Washington, Derek J, and Bevy Smith bring a bit of diversity to the talk show scene as one of the few shows featuring an all African-American hosts. Bevy Smith is a social media socialite and has done work for magazines such as: Vibe and Rolling Stone. Derek J and Lawrence Washington are celebrity hairstylists. Both men have a wealth of knowledge regarding fashion. Washington in particular, is the most abrasive of the 3 and frequently creates sound bites as he pulls no punches with his fashion critiques.

While the TV show Fashion Queens might have a very select appeal, the taping provides a bit more of entertainment to those who are not as invested in fashion or pop culture speak. Alcohol is served; (therefore everyone must be 21 to attend) and it is the alcohol that gets everyone loosened up for the taping. The set of the show creates a visual very much in line with the show’s title Fashion Queens with a heavy emphasis on “queens”, as gold and pink colors litter the show stage and set.. The hosts sit in lavish chairs while expensive accessories such as purses, jewelry and shoes comprise the back-drop.

The audience members are in close proximity to the banter and have the opportunity to be the first to get the inside scoop of the opinions and entertainment news levied out by the dynamic trio. Fashion Queens also involves a segment for audience interaction via social media. During the segment “Ask a Queen”, the hosts respond to questions and comments they receive via Twitter and Instagram. The show films in Manhattan, New York on Fridays with call times usually at 4:15 pm but occasionally at 2:15 pm. Bravo is selective in terms of the invited audience who they bring into the studio, which creates a nice balance.

The show contains seven segments, one in which they cover the latest fashion news, “Reading Room” where the panel discusses specifically celebrity fashion, “Right or Ratchet”, where they determine if celebrities hit or miss on their wardrobe, “Style GPS”, where the hosts discuss trending fashion news around the globe, “Ask a Queen” where the hosts take on audience questions via social media and the “Gag Award” where the hosts give awards for their favorite fashion looks. The series may remind some of E's Fashion Police but viewers will not have to look too hard to find the differences. As two of the hosts first made their television appearances on The Real Housewives of Atlanta, it's clear Bravo is trying to encapsulate some of that same demographic into that show,

It is no question that Fashion Police is a veteran in chit-chat about the best and worst dressed in Hollywood. However, with Fashion Queens gaining fans at a steady pace, Fashion Police might have some competition. After the late-great Joan Rivers passed on September of 2014, Fashion Police has lacked the pizzazz it used to have, even after comedian Kathy Griffin attempted to replace Rivers' electric personality with her own nod to Rivers.

Some may say the hosts try too hard to make the show more about themselves rather than the content they are covering; however, that may just be a byproduct of the hosts' vibrant personalities. Both Derek J and Lawrence Washington are flamboyantly gay hosts and they showcase their personalities in a loud and flamboyant fashion, making the show both vibrant and colorful. Lawrence Washington, in particular, dresses in a very feminine fashion and is very critical of celebrities perceived public fashion blunders

Fans of the hosts may find the show a refreshing and funny source for their fashion and celebrity gossip fix, while the abrasive style of the group (in particular Derek J, who is known for his unfiltered criticisms) may turn others off. The show appears to have found a loyal following as it does very well in the demographic of viewers between the ages of 19-45, especially those who have interests in fashion and pop culture. Fashion Queens is a nationally broadcast cable fashion talk show discussing various topics of pop culture, airing on Bravo on Sundays at 11:30/10:30c.