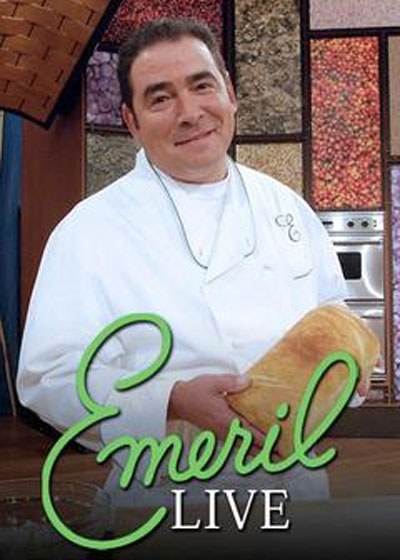 Emeril Lagasse is easily one of the world's best-known gourmet chefs. Emeril came to prominence as the Executive Chef at the Commander's Palace restaurant in New Orleans, and earned his status as a household name with his shows on the Food Network. Even people who aren't cooking enthusiasts know Emeril thanks to his ubiquitous catchphrases such as "Bam!" and "Kick it up a notch!"

Unfortunately, Emeri Live has been canceled and so Emeril is no longer taping new episodes of the popular Food Network TV program.

After a wildly popular run on the Food Network that lasted for over a decade, Emeril Live, Emeril Lagasse's live cooking show was inexplicably canceled, leaving Emeril's fans bereft. Bam!

Emeril Lagasse didn't become famous overnight. He worked in a bakery during his teen years, formally studied the culinary arts at Johnson and Wales University, and continued learning the craft of creating fine cuisine in France. Emeril went on to work at restaurants in several major cities, including New York and Boston, until he ended up in New Orleans, where he made his name as a chef and currently has three of his own restaurants.

Emeril continues to be inspired by the tastes of N'awlins, favoring Cajun and Creole cooking. Given his success in the restaurant business and his rising status as a chef, Food Network gave Emeril his own show, Essence of Emeril. In 1997, Emeril started a brand new Food Network program, Emeril Live, a more lively version of the traditional cooking show in which he makes his dishes in front of a studio audience (a few of whom get to sit up close and sample the food). The show, which has been going strong since then, won a CableACE Award in its debut year.

Emeril Live was the cornerstone of the Food Network. The show was structured almost like a talk/variety show, and has had a wide range of special guests from Billy Joel to the New Jersey Devils. There is even a house band, Doc Gibbs and the Emeril Live Band -- occasionally Emeril himself, an accomplished drummer, joins in. The audience is made up of fans who are clearly aware of Emeril's culinary tastes (garlic always gets a strong reaction), and if the folks at home have trouble following Emeril's fast-paced style, they can just log on to the Food Network to get the recipes.

A combination of talent, hard work, and a jovial personality has helped to make Emeril Lagasse a superstar in the world of food. His numerous cookbooks have been bestsellers, he has earned acclaim for his restaurants in Las Vegas, Atlanta, Orlando, Miami, and New Orleans, and his unique blend of spices known as "Emeril's Essence" is a favorite among home chefs. Emeril is a frequent Daytime Emmy nominee, was briefly a sitcom star, and has even earned an honorary doctorate from his alma mater. Bam!

The Emeril Live TV Show, which tapes in New York City, had an inauspicious start at the Gordon Elliot TV studios on Ninth Ave in 1997, after Elliot's TV show was cancelled.Emeril Live TV Show This studio was in a rough neighborhood where hobos would sleep nightly under his awning and staffers would have to pry them out each morning before the show taped.

In 2000 Emeril moved his TV show further north to the Image Production Center at 733 Eleventh Avenue, and finally relocated to a big studio at the Chelsea Market in 2004, where lots of fresh fruit, vegetables and meats are available at the organic market directly under his studio (just in case they ran out or he wanted to try something different on the day of production). This location choice was a master stroke and the best one, rumor has it, that Food Network chief Bob Tuschman ever made. Unfortunately Tuschman went on to relegate Emeril Live to a 1:00AM slot in a power struggle and the show died in the ratings.