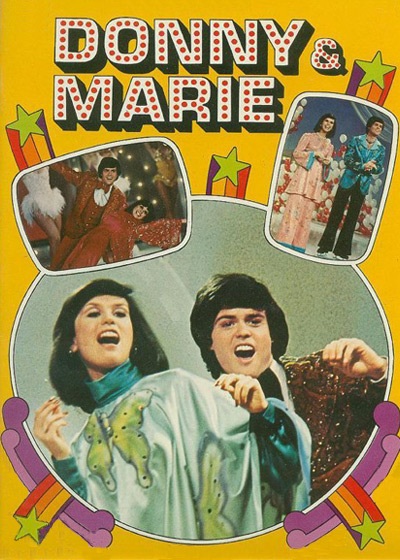 Donny and Marie are America's quintessential brother and sister team. People remember them as teens from their hit musical variety show "Donny and Marie," back in the 1970's and this show is a reboot of that format.

We have the latest standby and telephone ticket information for this show in our new TV Show Ticket Guide. The guide gives you all the telephone numbers and other information you will need to get a ticket for this show and all the other TV shows in the New York area.

The show is Broadcast in syndication at 10AM daily

America's classic brother and sister team starred in this musical variety show which aired on ABC. The two are a classic, spawning memorable songs such as "I'm a Little Bit Country, I'm a Little Rock n' Roll", "Vegas Love", and "I Know This Much is True". In their heyday, their following was so fanatic it was dubbed "Osmondmania".

When "Donny and Marie" premiered January 16, 1976, Donny was 18 years old and Marie was 16. They were the youngest hosts ever of a weekly national TV series. In fact, Marie's 18th birthday party was telecast on the show. One of the highest-rated variety series in TV history, "Donny and Marie" was a phenomenon, one in which songs, phrases, even hairstyles from the TV show became the rage among their young fans. From Donny's teeth and purple socks (both subjects of Marie's jokes) to their "I'm a little bit country, I'm a little rock n' roll" duets, they became forever part of American pop culture. Eventually, the series--produced by Sid and Marty Krofft of Saturday morning TV fame--moved its production to the Osmonds' home state of Utah, where they built a state-of-the-art studio. Winning two People's Choice Awards as Favorite Variety Series, "Donny and Marie" spent four seasons on ABC, 1976-79 (during its final season, it was reformatted as "The Osmond Family Show"). Their music career as a duo, not so coincidentally, also flourished. During the run of the series, Donny and Marie claimed four Top 40 singles, "Deep Purple" (1976), "Ain't Nothing Like The Real Thing" (1976), "(You're My) Soul And Inspiration" (1978) and "On The Shelf" (1978), and three gold albums "Donny & Marie Featuring Songs From Their TV Show" (1976), "New Season" (1976) and "Goin' Coconuts" (1978). The latter was a soundtrack of songs from the duo's only starring motion picture. Other than concert tours in the early 80's, their popular Hawaiian Punch TV commercials, and guest spots, Donny and Marie had not regularly performed together since the series. "Donny & Marie," their new entertainment/talk series, marked their reunion in 1998. Their most recent crowning achievement was hosting the final Miss America pageant of the millennium.

Donny & Marie is an American talk show revival that was hosted by Donny and Marie Osmond. The show aired in syndication and was produced by Dick Clark Productions. The duo were big fans of music, so unlike other TV talk shows of the time, this show had a "house band".