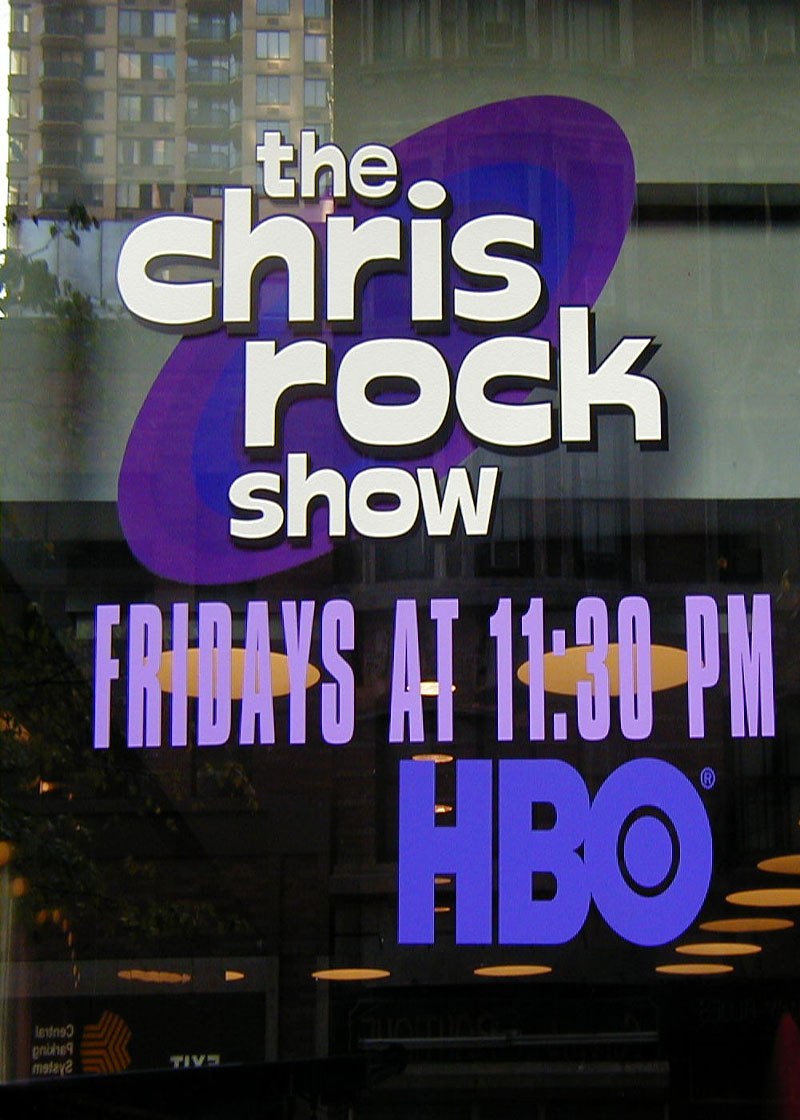 No longer held back by the NBC stiffs, SNL alum Chris Rock landed his own show on HBO which projected him into comedy super-stardom.

Chris Rock records his weekly show for HBO "The Chris Rock Show" in New York every Friday night at 6:30PM in the Circle in the Square Theatre on Broadway.

After Chris Rock's three disastrous seasons on SNL, his one-man-show on HBO became a behemoth hit TV show of the same name and went on to three glorious seasons of success, albeit on cable.

This show finally established Chris as a household name in comedy. In late 2000, Rock moved on to big Hollywood movies and HBO could no longer afford him. Rock now vacations in St. Bart's and has never looked back.

The show is broadcast at 11PM on Friday nights on HBO

With the Johnny Cochrane interview in December 1992, Rock asked both the questions any journalist would (Does race matter? What's the media's role?) He also asked other questions that only he has the guts to (Does O.J. owe you money?).

Johnny Cochrane 1992 Interview Sums Up Chris Rock to a Tee

In praising Cochrane's career, Rock mixes respect with mockery: "Todd Bridges shot at someone eight times. You got him off! Michael Jackson had a kid staying at his house. You talked to someone and he's a free man! "Then there's the guy who "threw that white girl out the window." When Cochrane cuts in to add " ... just an allegation," Rock has a field day: "Just an allegation? Yeah. Some people think they can fly I just helped her..."

If Rock's taped segments on his show is any clue, these might be the show's strongest points. He heads to whiter-than-whitebread Howard Beach, Queens, in a postered minivan blaring rap -- proposing a street change its name to Tupac Shakur Blvd. And Rock has the coolest house non-band on television ever: Grandmaster Flash spinning vinyl, smooth as silk. My only criticism has nothing to do with content, but with timing. Much of Rock's genius lies in his biting insight into current affairs and touchy political headlines.

Tonight's opening monologue is funny; It just would have been funnier when the topics he covered were still hot. On ebonics, he says: "Yeah. There are two ways (of speaking). One way if you want a job ... and that other way," he says, shooting a sideways glance at the camera. Even jokes about one of his favorite subjects, O.J., fall a little flat, in light of recent news, but Rock still allows to audience tension develop into a belly laugh. This guy is going to go far.

For the longtime Saturday Night Live fans, the news that the SNL alum comic Chris Rock had landed his own show on HBO was a mixed blessing. The chance to see the creator of Nat X and other tell-it-like-it-is characters live on stage sounded promising, but you could only see it if you had paid for access to HBO (Home Box Office).

Of course, there are other upsides to being on HBO. You can say pretty anything you want without SNL Produce Lorne Michaels breathing down you neck, which stifled Rock's creative juices during his lackluster tenure on SNL in 1990-1993. It was during this time that very little of Rock's work got approved for SNL transmission.

Whether it's in his monologue or interviewing guests, Rock manages to be naïve, insightful, cynical and wry all at once.

We got to see Chris get all over O.J.'s recent, "If I did kill her ..." hypothetical dance. (Actually, TV critics were treated to a taste on preview cassettes as Rock introduced us to the first show ... maybe that's why I'm a little bitter).

On the flip side of the matter, all this stuff is still pretty hilarious, but we can only imagine how warped his take would be on recent events. Who knows what kinds of programming deals and restrictions came into play when The Comedy Network make a deal with HBO. Whatever they are, we're always going to be a season away from Chris Rock at his hottest. Good thing it's still a funnier place than most TV talk shows.

Critics contend that Chris Rock has developed the "Eddie Murphy" disease, which means he can no longer perform in front of a live audience and must star in lame-ass, Blaxploitation movies that fail dismally both critically and at the box office. We don't believe that and we hope to have Chris back in New York soon!

While Rock takes a sharp look at race relations, somehow he seems to be pointing out the logic of a situation, not playing it for cheap laughs. And sure, Rock's talk is littered with profanities, but he cleverly times them as meaningful punctuation. Most of the time anyway.

Circle in the Square Theatre