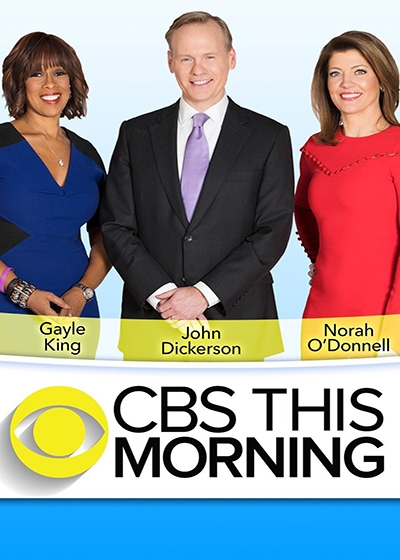 Once a soft-news lifestyle format morning show, CBS This Morning is now a hard-news TV show. As ratings rise and fall, the show adjusts its news format.

This TV show does not have a live audience.

This show tapes, live to air, Monday to Saturday mornings from 7:00AM to 9:00AM.

The show is also broadcast in Australia on Network Ten, This is a CBS news and entertainment affiliate with a national weather map inserted during the slots allocated for local news. Just as in the US Market, the show competes with Good Morning America (Nine Network) and Today (Seven Network).

Award winning journalist and host of his long running interview show, the Charlie Rose Show on PBS Rose was fired from this show in November 2017 following sexual harassment accusations made against him becoming public knowledge. After Rose's firing, various anchors have filled the third spot on a rotating basis.

CBS This Morning is a network televised television morning program on CBS. It is CBS's tenth attempt at a morning news program, and the second one to bear this name.

The first CBS This Morning aired from 1987-1999. The show is considered a "hard" news program as opposed to the "soft" news that one sees on Today or Good Morning America. Its current hosts are Charlie Rose, Gayle King and Norah O'Donnell. The first CBS morning program, The Morning Show, debuted in 1954. Walter Cronkite was the host and it was similar to the Today show on rival NBC.

Over the next decade it had numerous hosts and formats, The last incarnation before it became the show one sees today was The Early Show, which ran from 1999-2011.

The CBS This Morning TV show no longer has a live studio audience, or any kind of interaction with the public. The show used to have both an inside and outside audience similar to GMA or The Today Show, but when it moved back into the news division both its location and format changed drastically.

Now the show is located in a nondescript building on 57th Street. The target demographic for the show does not warrant the need for a studio audience, as it is focused on news.

The Early Show went back to a more informal, morning show format in 2004 and had contributors like Martha Stewart and musical performances by popular singers like Susan Boyd. This led to the most competitive ratings the show had seen in years, however, they still remained in third place. In 2011, CBS news division head Jeff Fager announced that the new show would be a hard hitting look at news, with no silly banter, cooking segments, goofy weathermen or outdoor audiences.

The new show format premiered January 9, 2012. Although still ranking number three in the morning slot ratings, its serious, in depth news reporting has garnered it critical acclaim and a different demographic than its light-fare competitors at GMA and the Today show.

Both the Today Show and GMA aim for a younger, on-the-go target audience. CBS This Morning finds its viewers in the older, baby boomer generation, much more likely to be home and wanting to see serious news first thing in the morning.

Although still in third place in the morning slot, this show is gaining ground on the other soft-news morning shows compared to the same time last year. Viewership is actually up as well as an increase in its demographic.

The show just recently reported its highest viewing audience in 11 years, which has been a steady climb after it went back to its roots in news.

These types of shows are cyclical and it is expected that it will again, one day, become a frivolous morning TV show with celebrity gossip, lifestyle tips and moms with signs outside the window. That is not currently possible with the tiny sidewalk at the new and depressing studio location.

Noteworthy Dates for This TV Show:

1955- Show is cut by one hour to make room for Captain Kangaroo, a popular children's show