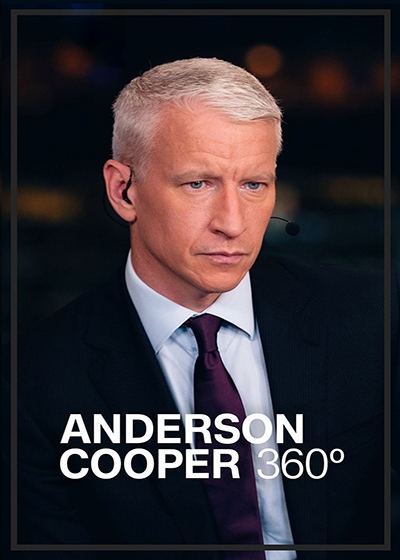 AC-360 does not have a live audience. However, you can watch it live every week day on CNN.

AC-360 is transmitted on Channel CNN and it is also aired on CNN International.

Anderson Cooper is the son of well known socialite Gloria Vanderbilt and author Wyatt Emory Cooper. Although he came from money and had a private school education, his early life was marked by tragedy. His father died when he was just 10 years old, and when he was 21, his older brother committed suicide by jumping from the terrace of his mother's New York penthouse apartment. Cooper attributes both of these events to his desire to search for the meaning of life, and to how the world works. After graduating Yale with a political science degree (and two summer internships with the CIA), and unable to get a job with ABC, he took a job as fact checker at Channel One, a news program broadcast to many junior and senior high schools. Cooper made a name for himself when, using fake press documents, he went to Myanmar and met with rebel students fighting the government. He spent the next few years living in Vietnam and traveling and reporting from horrific war torn regions like Bosnia and Rwanda. In 1995 he went to ABC where her eventually became co-anchor of World News Now. In 2005 he took an anchor position at CNN, which eventually led to the creation of his own show, Anderson Cooper 360. His in-depth and heartfelt coverage of Hurricane Katrina, as well as his willingness to confront officials who were providing a lackluster response, made Anderson Cooper a household name. In addition to his news reporting, he hosted his own syndicated talk show, Anderson, Live from 2011-2013. He is also an accomplished freelance writer as well as New York Times Best selling author.

At one time, Anderson Cooper fans were able to see and interact with him, up close and personally on his own syndicated TV show Anderson Cooper, Live that was carried by ABC in NYC. This show was cancelled in 2013 after just two seasons, but garnered a loyal following of viewers that he took back to CNN. The all-business news format of Anderson Cooper 360 does not have a studio audience and with the many off-site news reports and many national and international correspondents, the show does not lend itself to a live studio audience. However, Cooper fans still have a chance to be part of the show and have a chance to interact with their favorite news show host. Cooper has a real time twitter feed that he updates throughout his broadcast. He welcomes and encourages the viewing audience at home to share their opinion and comments, and when situations allow, to ask questions that he will answer. He also encourages people to submit topics and questions to be used as possible subject matter on upcoming shows, especially for the Keeping Them Honest segment. Considering there is no studio interaction, Cooper provides more up-to-date ways for the audience to interact with him than many other shows out there that already do include a live studio audience.

Anderson Cooper 360 started in 2003 as a relaxed, one hour news show, but with Cooper's growing popularity and willingness to go to where the news was happening, by 2005 he had garnered himself his own two hour news slot, with a repeat broadcast later that evening. The show morphed into covering hard news and has set the standard in cable news broadcasts with its focus on accuracy and integrity in reporting. Cooper's enigmatic personality has set him apart from other news broadcasters.

During his tenure on CNN's Anderson Cooper 360, Cooper also had a daytime TV talk show that ran for two seasons. This other show was initially called Anderson and then, in the second season reshuffle, was renamed to Anderson Live. The show lasted from 2011 until 2013