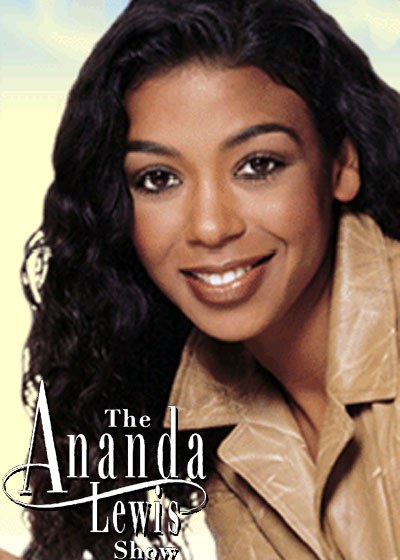 King World's new series, Ananda, has morphed into "The Ananda Lewis Show" - apparently because the name of its show and African-American female star is too close to Buena Vista's "Iyanla", the name of another show and African-American female talk-show host in syndication. Normally that would be complicated enough, but it turns out they are sharing the same studio - Gadzooks !

Sources say stations having one, the other, or both strips were having problems keeping the two shows straight-- not a great thing when you need to make a show stand out among a host of new and returning syndicated shows. There were definite tongue twister possibilities, though. Try saying "Ananda and Iyanla" five times fast. It is scheduled to premiere on Sept 10th 2001.

The Ananda Lewis show tapes on Tuesdays, Wednesdays, and Thursdays at 12:30PM and 3:30PM.

Although quite hip and smart, The Ananda Lewis Show only appealed to a vertical "MTV type" market which is so fickle that the network only kept her show on for one season. The show had its last episode on August 12, 2002.

In the USA the show is usually broadcast the during the two weeks following taping.

Based on Ms. Lewis' deep credits as a host of series and specials for BET and MTV-including the currently running ``MTV Cribs'' series-she could provide a "young, new voice of talk so desperately needed for the genre.

Station clearances for "Ananda'' received a notable boost late last year from a deal with the Tribune Broadcasting Group,indicative of interest the show has been getting from traditional as well as onetime independent station groups. Because of that, "Ananda'' could have the versatility to be scheduled in morning or afternoon time periods.

The show is geared towards women 18-49 and is taped at the CBS studios in New York City.

What we've seen from Ananda's work on MTV every afternoon and on BET, she has the comfort and confidence to interview anyone from Hillary Clinton to Puff Daddy.There are some people that the camera loves-and she is one of them.

BVT's Iyanla Vanzant project and Tribune's "Talk or Walk'' get secondary recommendations because of their focus on relationships.

Taking into account Ms. Vanzant's background as an author, spiritualist and frequent guest on "The Oprah Winfrey Show,'' ``Iyanla'' is better suited for traditional network affiliates' daytime lineups, given that the show has a charter group deal with ABC-owned TV stations. ``Iyanla's'' executive producers, Barbara Walters (of ABC's ``The View,'' and ``20/20'') and Bill Geddie (a longtime executive producer of Barbara Walters specials), bring a strong connection with the network ranks.

"Ananda Lewis is an Award winning broadcast personality who earned recognition for her years with BET and MTV". The press blurb goes on to say "She is a remarkable and intelligent young woman who is passionate about many of the issues affecting people of all ages"

Nothing like blowing your trumpet... maybe Ananda's reeds are just what they need !