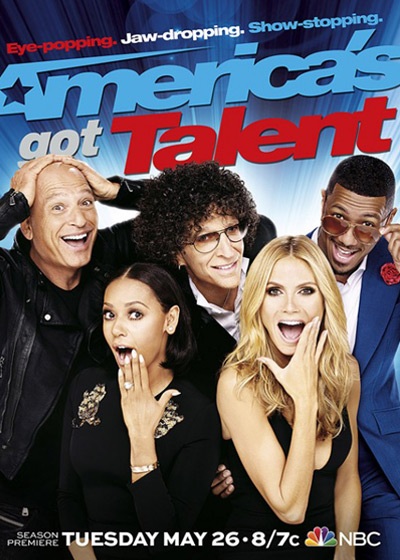 America's Got Talent is a prime time show contrived of different acts which compete to win a million dollar cash prize. These acts can range from singing and dancing to magic shows and comedy.

NBC's hit TV show America's Got Talent (or AGT as it is often known) is taped out of the New York City area. New York Show Tickets Inc. is not the official supplier of tickets for this show. Now in its tenth season, the show stars regular people with talents and boasts well-known judges Howard Stern, Howie Mandel, Heidi Klum and Mel B. Former judges have included Piers Morgan, David Hasselhoff, Brandy Norwood and Sharon Osbourne. Regis Philbin was the host for the first year, Jerry Springer lasted two seasons and was then replaced by Nick Cannon, who has held the spot ever since. The show has found very few sustainable acts that can survive outside the AGT environs.

You can get FREE tickets to America's Got Talent by going to the show's official ticket website. A link will redirect you to another page to get your free tickets. Information about that company can be found inside our guide.

America's Got Talent is taped Mondays, Tuesdays, Wednesdays and Fridays, two shows a day at 12:00 PM and 5:00 PM.

The show taping and eventual broadcast is a confusing list of dates and locations. in New York for instance (actually Newark, New Jersey) in March 2015 they shot the shows in five days and then edited them down to two shows. Then went on the road with other shows following the same format.

America's Got Talent moved its productions to LA.

You must be over 14 years old to attend a taping of America's Got Talent.

Nick Cannon recently received crowd boos at Madison Square Garden, when he came to promote AGT in MSG during a Knicks game . His AGT TV producers thought it would be a great idea to shoot an AGT promo at the game and for him to appear on the MSG Jumbotron and then do a trick shot (throwing the ball behind his head, while someone else throws a ball into the basket). His appearance on the Jumbotron was met with loud crowd boos and then his failed trick shot added to the crowd torment and they started getting mean. After a second, but successful attempt, Nick Cannon finally sat down and then left the stadium just ten minutes later as he appears to have little interest in the Knicks.

New Yorker’s generally do not like Nick Cannon and clearly Knicks fans positively dislike him, and now he knows it if he didn't know already. NBC’s AGT producers are well known producers of “fake-ality” TV Shows and are expected to still use the negative footage recorded at MSG, remove the loud boos, overdub the audio and edit out the fans rude hand gestures and make it appear that Mr Cannon was in fact the darling of The Garden

At a four hour taping of America's Got Talent they make the audience move around seats, ask you to scream at the top of your lungs and other general fake-ality rituals that TV shows want to make the at-home viewer think that the taping is one great party. Sadly, the show isn't that much fun. It is often an arduous day of clapping, standing, shouting, screaming and general audience mayhem. It will be exhausting and as an unpaid audience member you may want to leave thirty minutes in, as many people do. The audience management company may stand in your way, because they do get paid. The tickets for this TV show are free, but it is not the best TV show experience around, as there are other TV shows that are less huge and a great deal more personal and are fun. It is at these other TV shows where you can get up close and personal to the celebrities and actually see the performer on the stage rather than view them from so far back that their facial expressions cannot be seen, unless you look at the giant TV screen, but if you have to do that, you could have done that at home. No drinks or food are supplied at this show and they will not pay for your parking, so this show is for hard core fans only, who are ready to commit to four hours of their life being entertained by sub-par entertainers after a long commute.

With the introduction of the famed shock jock and Sirius Satellite Radio personality, Howard Stern, ratings on the show shot up with an injected new vigor into the franchise that had been breathing heavily when operating out of Los Angeles.

Because of Stern's long-standing reputation as a provocateur, the Parents Television Council immediately blasted NBC for the decision to hire him as a judge on America's Got Talent, but Stern took the criticism in stride. In an interview with CNN host Piers Morgan, the man who he replaced on the judging panel, Howard Stern said, "I can assure you and the rest of America what I'm looking at here is to be a very good judge." He added, “Whatever you think of me, I'm honest and I'll give you an honest opinion."

Of course Howard Stern was not allowed to bring along any of his trusty radio sidekicks such as Robin Quivers to his new gig on America's Got Talent. He joined host Nick Cannon and Sharon Osbourne (later replaced by Mel B and Heidi Klum) and Howie Mandel. In his interview with the New York Post, producer Simon Cowell said that they wanted to bring on someone younger and female to help balance the panel, "Someone who will not be afraid of Howard and fight for a different type of act than they would. It was ironic that Osbourne was replaced, by two other women judges, both of which lacked the production experience that Osbourne brought.

America's Got Talent often boasts that the winner will be awarded the top prize of one million dollars, but the fine print indicates that the prize money is before tax and is also paid out over forty years, which equates to just $12,500 per year. The winner can take a jump sum instead which is just $100,000 before taxes. It is clear that the prize is paltry compared to the amount of publicity the artist gets from being on the TV show. It almost feels like no monetary prize is really necessary, as the intangible benefits from publicity are so strong, but NBC execs feel that the prize makes the competition more viable in many TV viewers eyes, so they have kept it alive.

The show has generally failed to be a barnstormer in the ratings, but has come in regularly at a very decent 12 million viewers per episode. The 2012 season, was the poorest in terms of ratings for the final show, coming in at 10.5 million. This was primarily due to Sharon Osbourne announcing her leaving the show because of the dispute with NBC over her sons' firing. Also the two acts in the final show, Olate Dogs and Tom Cotter were not a big favorite of television viewers, the ultimate winner was Olate Dogs.

The dynamic of the show was damaged in 2012 when Sharon Osbourne, who had a great dynamic with Howard Stern and Howie Mandel, quit the show. Osbourne was particularly incensed with NBC after the network fired her son, Jack Osbourne, from his upcoming "Stars Earn Stripes" reality competition series after he was diagnosed with multiple sclerosis. NBC denied that the cancellation had anything to do with his diagnosis and axed the show anyway. Osbourne went on to great success in her own TV show in Hollywood, The Talk.