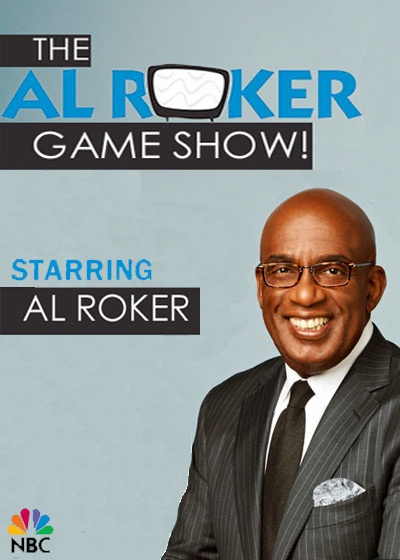 Author, weatherman and TV personality Al Roker collaborated with NBC to host another TV show aside from his gigs at NBC Today and his many movie roles (over 25 to date).

Roker's new game show, The Al Roker Show resembled the format of The Newlywed Game in which couples ask questions and test their spouse's knowledge about each other. The show was updated for the times and included gay couples and some unmarried couples.

Roker collaborated with NBC to shoot the pilot, which gathered roughly 50 audience members in Danbury, Connecticut. These people were recruited based on demographic characteristics such as race, gender, and age. The taped show was then shown to test audiences to view and their feedback allowed the show producers to tweak the formula for maximum effect.

The final taped shows were then shown to NBC Universal studio execs who ultimately passed on the show. The Al Roker Show was announced to be broadcast in the Fall 2015 on NBC daytime but never made it to the TV screen. It is unclear whether NBC plans to continue with this project at this time. This show may join the long list of TV show pilots that never make it to air. The tapes of the show are held in the NBC vault in 30 Rockefeller Plaza in New York City.

Tickets to the Al Roker Show aren't available at this time.

The show tapes daily Mon-Fri at 10 AM

The Al Roker Game Show was cancelled late 2015 before it had the chance to air on NBC. The weatherman's game show did not make the cut, and was called off when the show was still in pilot.

Very little is known about the show, as it never saw the light of day. The only people who ever saw the final product was NBC management and the paid audeince members that attended the tapings. Al Roker has joked in that past on the Today Show that he has never seen the final product.

Al Roker first made his name as a weather anchor in 1974, working for a CBS affiliate WHEN-TV in Syracuse, New York. Since 1996, he has been the weekday weather forecaster on NBC’s The Today Show, and since 2009 he has hosted an early morning show every weekday on The Weather Channel called Wake Up With Al.

Al is beloved for his creative approaches to forecasting the weather, often done outside the studio, as well as his success as an actor and as book author.