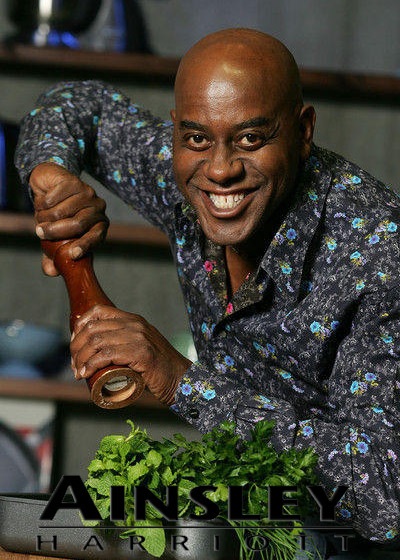 This show tapes at 9am each weekday

This British import "celebrity" chef tried to emulate Emeril Lagasse's charm and charisma but failed miserably to achieve his level of success. The TV show lasted one season before the Pepto Bismol police were called in to pump TV viewers stomachs.

The show is broadcast at 11AM each weekday morning

His name is Ainsley Harriot and he is a C-List celebrity TV Chef you should be scared of....From the UK's "Can't Cook Won't Cook" to "Ready Steady Cook", this aptly named "Poor Mans Emeril" has charmed middle aged women everywhere, and made anyone younger want to barf up their crepe suzette.

With his "Suzi Salt" and "Percy Pepper" routine the canned laughter never ends. If only the comedy could go back in the can.

Ainsley Harriot has the dubious honor of being number one in many people's' celebrity hate list. Like never before in daytime TV history, Harriot has managed to galvanize the TV viewing public into lovers or haters (Apologies to Michael Jackson.) Even for the people that do love him, they cannot seem to remember his name properly and the usually spell it incorrectly as Harriott or even Harriat. This poor guy just cannot get a break, but that does not keep him from smiling through the whole ordeal and moving onto the next segment of banana nut crumble.

A One Man Mix of Talents

Never before in the history of cooking shows could one man been so annoying, unfunny and downright dumb....all while getting you hooked on his wares. You wait for the next stupid act that he may conjure up....Like something out of a culinary Jerry Springer.

Sure, there was was no trailer-bake bitch-fight here, but you feel that at any moment Steve and Mike (The Springer bouncers to the uninitiated) would set forth and begin throwing overcooked food at the audience to the unison audience cheers of "Ainsley! Ainsley!"

This British Export May Not Survive US Sensibilities

The word on TV street is that the UK loves his ham, but Ainsley Harriott is more akin to Robbie Williams and the Spice Girls than he is to the Beatles and Benny Hill - Only the latter two made it in the grand ol' US of A, which proves we may have an over-developed sense of taste. Having said that, both the English and American versions of The Office were beloved by the American audiences, so maybe quality does have something to do with it.

Watch as Ainsley flamboyantly sprinkles herbs over another masterpiece, waving his hands everywhere and giving a cheeky look to the camera as if to say "I really, really, really am funny... just look harder".

Ainsley Harriot puts far too much effort into trying to make us laugh at something as blatantly unfunny as cooking a flan at 350 degrees. If only he stopped singing this crime would end.

After four months on the air, the NBC big wigs in New York were finally able to pull their head out the toilet bowl and saw the light (And the ratings) and pulled The Ainsley Harriot TV show off the air. The studio in Chelsea piers in New York, will never be the same again. Even the bums on the West side are passing-up on his mango-cranberry nut crumble. They said it would make them sick.

Previously, Ainsley Harriott had been signed up by the BBC in England to do a series of "Computers Don't Bite ..." He has admitted to not knowing anything about computers which just adds to the theory that he has no talent concerning anything that doesn't involve mange tout - even that is questionable.

Watch him and make up your own mind ...If you hadn't already lost it...